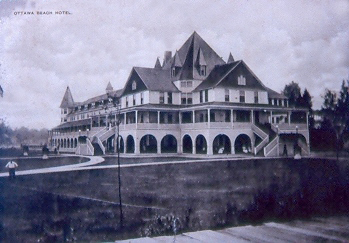 As the 20th century summer resort season unfolded, the spacious Ottawa Beach Hotel on the north Lake Macatawa shores was regarded as a place of beauty with a 200-room capacity and a dining room seating 300. It fronted on Macatawa Bay and faced south.

Tuesday, Nov. 6, 1923, became its day of infamy when a brisk wind late that afternoon formed the backdrop as workmen completed final touches on an elegant addition to the facility’s dance hall.

The season had closed and the building was not occupied. Workers left the place at 5 p.m., completing the $15,000 addition to the spacious hotel — one of the finest summer resort hotels in western Michigan. It was located near the present Coast Guard station with the existing pump house nearby.

About 5:15 p.m. that afternoon, Edwin Antisdel was passing by and saw a small fire in the main building. Antisdel had been hotel clerk for the past several summers and was well acquainted with the facility.

Before Antisdel could call for help, the fire had started its destruction. Within 10 minutes, the building was doomed.

Antisdel notified Mrs. William Murphy, wife of the hotel custodian who lived in a nearby cottage. Mrs. Murphy called the Holland Fire Department.

The blaze quickly ran along a hall extending to the hotel annex, then attacked the hotel laundry and continued its devastating march through the building. Next came the destruction of the two-story women’s dormitory and the damage continued through storage buildings and a garage.

Although the hotel had 1,600 feet of hose and a tank to send water to every part of the grounds, this water tank had been drained a few days earlier by Murphy before he left on a deer hunting trip to northern Michigan.

The Holland Fire Department, under Chief Cornelius Blom, made the trip in 20 minutes. They immediately ran into problems. Firemen first had to get the heavy pumper down from the concrete on the Ottawa Beach Road to the water’s edge so the hose could be placed in Lake Macatawa.

Placing the hose so that it would not suck from the lake bottom and clog the pipe presented the next difficulty. Some firemen and volunteers removed their shoes and socks, rolled up their trousers and entered the cold water to build board platforms for the hose.

Firemen, aided by Coast Guardsmen who came from their quarters on the south side of the channel, plus numerous volunteers were able to save the pavilion, plus the dock building and the Murphy residence.

There were 75 cottages located on the dunes above the hotel. Recognizing the hotel was destroyed, firefighters concentrated on the cottages. They were able to save all of the summer homes.

Charles Jackson, who worked for George Getz at Lakewood Farm and Zoo, directed the laying of a plank road for the pumper. He then set up a bucket brigade to douse the small fires on the docks.

He also brought a truckload of hose from Lakewood Farm, (located two miles north at Lake Shore Drive and Lakewood Boulevard.) This hose was added to the 1,400 feet from the Holland Fire Department, plus additional hose furnished by the Ottawa Beach Association.

It was later determined the fire originated in the hotel barber shop or manicuring parlor next to the center of the main building.

Thousands of Holland area residents saw the blaze. People went to Ottawa Beach, Macatawa Park and Jenison Park to catch a glimpse. Many persons walked long distances along the road. Pere Marquette railroad travelers reported the following day that the glow in the sky could be seen as far away as Michigan City, Ind.

The Holland Sentinel reported that “every person who had a car was watching the scene and the scene was the same on both sides of the lake as every available inch of space was taken by cars.”

The Michigan State Parks Board eventually bought the property and developed it into Holland State Park, the most popular of the Michigan state parks.

More about Hotel Ottawa, the predecessor of the Ottawa Beach Hotel.