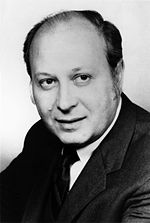 Barnett Rosenberg (16 November 1926 – 8 August 2009) was an American chemist best known for the discovery of the anti-cancer drug cisplatin.

Sometimes the greatest discoveries are made as a matter of chance. Were it not for the apple that fell on Isaac Newton’s head, for example, the concept of gravity may never have been discovered. And if it were not for a stack of dirty dishes, Alexander Fleming may have never unearthed penicillin. Barnett Rosenberg’s discovery of Cisplatin follows suit.

Rosenberg graduated from Brooklyn College in 1948 and earned a PhD in physics from NYU in 1956. His first major breakthrough came in 1965 while on MSU’s faculty. While performing experiments to determine whether electromagnetic energy could stop cell growth in bacteria, Rosenberg and his colleagues discovered that platinum-containing electrodes, not electromagnetic energy, ceased cell division. Additional research established that electrode platinum, when combined with chloride and ammonium, had an even more dramatic effect on cells.

Recognizing the implications for tumor growth, Rosenberg began producing the chemotherapy drug Cisplatin in 1978 and it is still widely used today. Cisplatin has a cure rate of nearly 100 percent for testicular cancers and significantly lowers the rates of lung cancers, head and neck cancers, bone cancers and early-stage ovarian cancers. In 1999, three separate studies appeared in the New England Journal of Medicine which found that Cisplatin, when combined with radiation treatment, reduced death rates from cervical cancer by up to 50 percent. The results were so definitive that the National Cancer Institute, for only the fifth time in history, didn’t wait until the findings were published and immediately sent notices to thousands of oncologists around the world urging them to implement the treatment.

Rosenberg turned over his royalties from patenting cisplatin to MSU – over $300 million. This money was set aside to create the MSU Foundation and fund the various faculty support programs including the Discretionary Funding Initiatives (DFI), Humanities Arts Research Program (HARP), and Strategic Partnership Grants administered by the Vice President’s Office for Research and Grauduate Studies.

On the Banks of the Red Cedar : Barnett Rosenberg entry