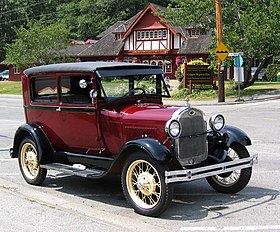 On this day Ford Motor Co. unveiled its Model A automobile for customers for the first time.

The Ford Model A of 1928–1931 was the second huge success for the Ford Motor Company, after its predecessor, the Model T. First produced on October 20, 1927, but not sold until December 2, it replaced the venerable Model T, which had been produced for 18 years. This new Model A (a previous model had used the name in 1903–1904) was designated as a 1928 model and was available in four standard colors.