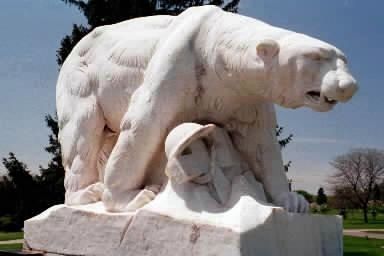 Detroit’s Own” Polar Bears Memorial,White Chapel Cemetery, Troy, Michigan.  This work, by sculptor Leon Hermant, was dedicated on May 30, 1930.

On May 30, 1930, in an impressive ceremony attended by top military personnel and countless city, state and governmental dignitaries, 41 men of the 339th Infantry and the 330th Engineers were finally laid to rest around the Polar Bear Memorial. In subsequent years, an additional 15 men (one in 1932, 13 in 1934 and one in 1935) of the 339th Infantry and 330th Engineers were laid to rest around the monument. These were members of Michigan’s own Polar Bear Division who made the supreme sacrifice in the far off frozen tundra of northern Russia during World War I. The famed memorial, created by the renowned French sculptor Leon Hermont, was carved from a solid block of white Georgia marble. It has been designated an Historic Site by the State of Michigan. Every year on Memorial Day, White Chapel hosts a Memorial Day ceremony in honor of these brave soldiers at 11 a.m. that is free and open to the general public.

Voices of a Never Ending Dawn : The Heroic Story of the American WWI Polar Bear Force in Arctic Russia. description and 5-Minute Preview of Documentary

A Michigan Polar Bear Confronts the Bolsheviks : A War Memoir by Godfrey J. Anderson. This rare volume contains the graphic story of a young Michigan soldier’s experiences during President Woodrow Wilson’s ill-fated 1918 military expedition against the Bolsheviks in the frozen reaches of northern Russia — a little-remembered event in U.S. history. As a member of the U.S. “Polar Bears” medical corps, Godfrey Anderson (1895–1981) tells of his travels by ship and train to Archangel, Russia, where a 5,000-man American contingent joined forces with French, British, Canadian, and local Cossack fighters to hold back the Red Army. Anderson’s unit set up field hospitals in the vast Arctic wilderness, endured the bitter cold of winter and the ravages of the Spanish flu, rubbed shoulders with Russian villagers, rescued scores of wounded from the advancing Bolsheviks in a harrowing nighttime retreat by sleigh — and more.

When hell froze over / by E.M. Halliday. New York : ibooks ; distributed by Simon & Schuster, c2000. On November 11, 1918, World War I officially ended. But for the men of the ill-starred American Expeditionary Force to North Russia, the fighting had only begun. Plagued by meager supplies, poor leadership, and the tack of a clear-cut objective, this small but valiant American contingent fought impossible odds, scoring several stunning victories against the Bolsheviks before superior numbers and the bone-breaking arctic winter that had defeated Napoleon forced them to withdraw. Now, in this clear, forthright account, E.M. Halliday re-creates one of the most obscure but important of America’s foreign interventions: an epic of confusion, endurance, failure — and gallantry — that history almost forgot and the Russians never forgave. Only today, more than seventy years after the Allied occupation of Archangel, have American-Soviet relations begun to thaw.

Polar Bear Expedition Digital Resources at the Bentley Historical Library at the University of Michigan.