The Detroit Tribune, a historic Black newspaper available online via the Library of Congress’s Chronicling America,  was published weekly from 1935 to 1966. Occasionally subtitled “Unswerving Dedication to the Truth” or “The Newsjournal of the Metropolitan Community”.   Here’s an image of the September 14, 1935 cover page from Chronicling America: 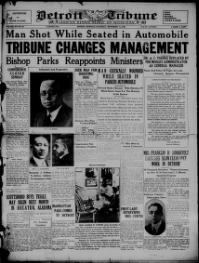 In April 1952, Andrew Fruehauf, heir to the Fruehauf Trailer Company Corporation, offered a bid of $15,000 to purchase a bankrupt newspaper, the Detroit Tribune. The Tribune was Michigan’s oldest existing Negro newspaper and was put up for public auction in an attempt to clear up some of its accumulated debt. Fruehauf was the chief stockholder in the Midwest Publishing Company that happened to own the Tribune. A devout Christian Scientist, he dreamt about converting the paper into a Negro counterpart of the Christian Science Monitor. He won his bid and became publisher and served in that capacity until his death in December 1965. He devoted the last years of his life to the paper, promoting and encouraging the aspirations of Black Americans. A huge congregation of the friends he had made in the Black community attended his funeral.

The Afro American featured his obituary, which may have shocked his relatives on February 12, 1966: “The entire estate of Andrew Fruehauf, member of the wealthy trucking family, has been left in trust for the perpetuation of the Detroit Tribune, Michigan’s oldest colored weekly newspaper. Fruehauf, who died December 4, 1965, in a will dated October 12, 1960, requested that his estate, now estimated to be in excess of a half million dollars, be left to the newspaper as long as it reflects the aspirations of colored Americans in the community. Fruehauf, who for more than a decade sponsored the newspaper, insisted that it carry on its pages material advocating the philosophy of the Christian Science movement of which he was a devoted believer.”