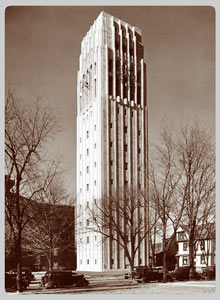 Burton Memorial Tower was erected during the 1935-36 school year and was formally dedicated on December 4, 1936. It was created as a memorial to former President Marion Leroy Burton, who served as president at UM from 1920-25.   According to UM, The Charles Baird Carillon in the tower is the third or fourth heaviest in the world. It sits atop the tower, containing 53 bells cast in 1936 by the John Taylor & Co. Bellfoundry in Loughborough, England.  The largest bell, which strikes the hour, weighs 12 tons, and the smallest bell, 4 1/2 octaves higher, weighs 15 pounds. In 2011, the carillon underwent a complete restoration, returning the original highest two octaves of bells and the original clavier.  The public can keep track of what songs are being played during 30-minute recitals, which are performed at noon every weekday when classes are in session. You can follow happenings with the tower on Twitter and Facebook.

Check out additional coverage of the University of Michigan Bicentennial here.