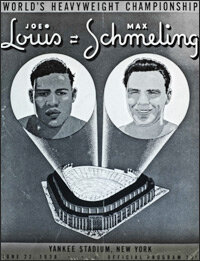 When Joe Louis was only ten years old, he and his family moved to Detroit in 1924. In his teens, Joe’s passion became boxing. After school and work, he trained in a local gym; working to distinguish himself among the city’s other young fighters.

Joe turned pro in 1934 after winning the National Amateur Union light heavyweight title. Before long, he established an excellent record. Reporters gave him a series of nicknames including: the Detroit Destroyer, the Michigan Mauler, the Sepia Socker, and finally the Brown Bomber, an epithet that marked the remainder of his career.

In 1936, Joe suffered his first professional defeat at the hands of German boxer Max Schmeling. But Lewis continued his climb to the top and the following year knocked out James Braddock to become the heavyweight champion in 1937.

Two years later, Louis fought Schmeling again. But this time, as the world was about to launch into war, their fight became much more than a boxing match.

In the spring of 1938, not long before the rematch, Joe visited the White house at President Roosevelt’s invitation. As he would later recall in his autobiography, “Mr. Roosevelt asked me about my plans for the fight, and then said seriously: “You know, Joe, America is never supposed to lose.” Then he felt my muscles and smiled.

True to his word, Joe Louis knocked out Max Schmeling in the first round.

After the large German was defeated, Michigan Governor Frank Murphy came up, shook Louis’ hand, and said, “Michigan is proud of you Joe.” That night, all across the nation, people rejoiced. Louis was no longer simply the heavyweight champion; he had become an American hero.

Also check out “Beyond Glory: Joe Louis vs. Max Schmeling, and a World on the Brink” by David Margolick (Alfred A. Knopf) – Set against the politically charged 1930s and the rise of Nazi Germany, this book explores the two historic boxing matches between Detroiter Joe Louis and Max Schmeling. Louis’ crushing victory in the 1938 rematch, only after his stunning defeat in 1936, shattered the myth of Aryan racial supremacy, reverberated throughout the world and provided an impetus for the nascent U.S. civil rights movement.