Walter Percy Chrysler, the founder of the American automotive corporation that bears his name, dies on this day in 1940 at his estate in Great Neck, New York, after suffering a cerebral hemorrhage. He was 65 years old.

Born in 1875 in Kansas, Chrysler was the son of a locomotive engineer; he began working himself when he was 17, earning seven cents an hour as an apprentice in a railroad machine shop. He worked his way up quickly, becoming a plant manager for the American Locomotive Company by the time he was 33 years old.

While attending a car show in Chicago in 1895, he became fascinated with this new transportation vehicle.  Borrowed $5,000 he  purchased his own car and had it shipped home to Kansas, taking it apart and putting it back together again before taking a single ride. In 1911, Chrysler accepted a job as a manager at the Buick Motor Company in Flint Michigan at half his former salary.  His employers were dismayed that he was leaving, offering him twice what Buick offered if he would stay.  Admitting defeat, they presented him with a cup thanking him for his services. 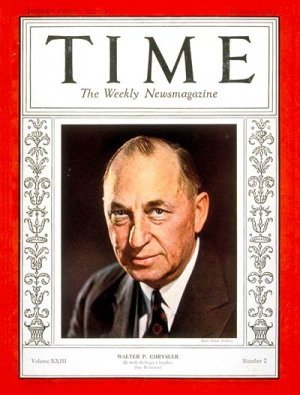 Within five years, he rose to become the Buick’s president, and to make Buick into the strongest unit within William C. Durant’s General Motors (GM).  Durant and Chrysler clashed over policy, however, and Chrysler left GM in 1920 to work with the Willys-Overland Company and with Maxwell Motors Company. A car designed by Chrysler and featuring a high-compression engine sold $50 million worth in its first year replaced the existing Maxwell car. In 1925, he emerged as president of the Chrysler Corporation, consisting of the former Maxwell and Chalmers car companies. After acquiring Dodge in 1928 and introducing the Plymouth that same year, the Chrysler Corporation would go on to become one of the Big Three of American automakers, alongside Ford and GM.

Aside from automobiles, Chrysler was chiefly known for financing the 77-story Art Deco skyscraper in midtown Manhattan (at the corner of Lexington Avenue and 42nd Street) that bears his name. To complete the distinctive ornamentation around the spire of the building, its architects used elements from Chrysler’s automobiles, including radiator caps, hubcaps and stainless steel that evoked the chrome shine on a car. When it was completed in 1930, the Chrysler building was the tallest building in the world and the first manmade structure to top 1,000 feet. Surpassed by the Empire State Building a year later, the building remains one of New York City’s most distinctive skyscrapers.

Source: History.com This Day in History