On August 12, 1942, the U.S.S. Wolverine-IX 64, the Great Lakes’ first and only aircraft carrier, was commissioned at Buffalo, NY. The Wolverine was then moved to Chicago and used on Lake Michigan to train student aviators in carrier landings and takeoffs.

Wolverine – a side-wheel excursion steamer built in 1913 – was originally named Seeandbee, a name based upon her owners’ company name, the Cleveland and Buffalo Transit Co. She was constructed by the American Ship Building Company of Wyandotte, Michigan. The Navy acquired the sidewheeler on 12 March 1942 and designated her an unclassified miscellaneous auxiliary, IX-64. Conversion to a training aircraft carrier began on May 6, 1942. The name Wolverine was approved on August 2, 1942 with the ship being commissioned on August 12, 1942. 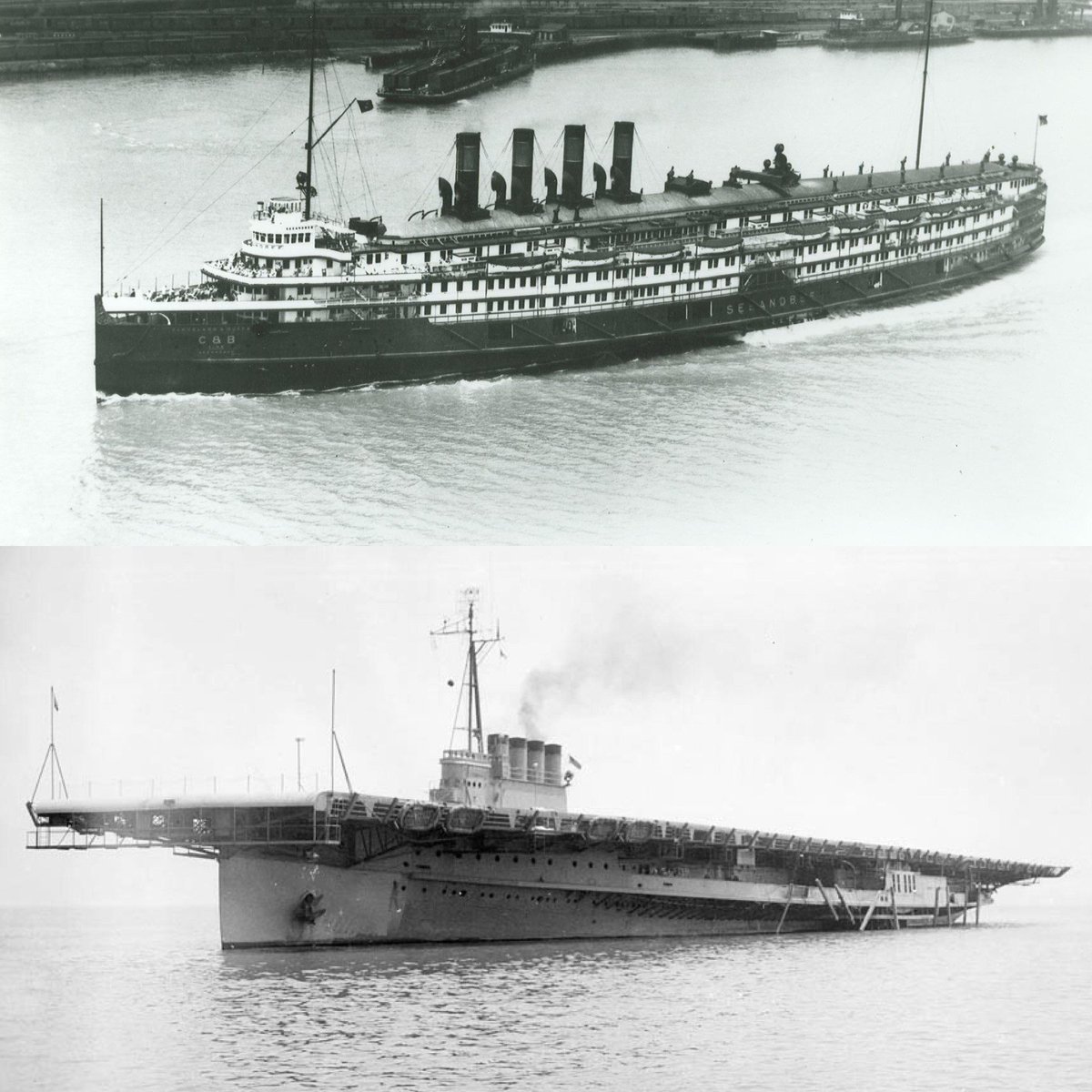 Fitted with a 550 ft flight deck, USS Wolverine began her new job in January 1943, joined by her sister USS Sable (IX-81) in May. Operating various aircraft out of Naval Air Station Glenview, a suburb of Chicago, the two paddlewheelers provided a training platform not only for pilots, but for Landing Signal Officers (LSOs) as well.

Sable and Wolverine were a far cry from frontline carriers, but they were suitable enough for accomplishing the Navy’s purpose: qualifying naval aviators, fresh out of operational flight training, in carrier landing techniques. The two carriers lacked certain equipment found on fleet carriers, such as elevators or a hangar deck. If crashes used up the allotted spots on the flight deck for parking damaged aircraft, the day’s operations were over and the carriers headed back to their home on Chicago’s waterfront, the Navy Pier.

Making only 18 knots top speed, the Great Lakes carriers had operational limits to contend with such as “wind over deck” (WOD). Specific WOD minimums of around 30 knots were required to land combat aircraft such as F6F Hellcats, F4U Corsairs, TBM Avengers and SBD Dauntlesses. When there was little or no wind blowing over Lake Michigan, flying operations often had to be cancelled because the carriers couldn’t reach the speed required to meet the WOD minimums. Low WOD speeds were critical on these carriers as the flight deck was relatively close to the water, compared to fleet carriers. Any aircraft not generating enough forward speed on takeoff would experience “sink” once clear of the bow. Many fleet carriers had enough height above the water for the pilot to collect the aircraft and gain flying speed, not so on Wolverine.

If low wind conditions continued over several days, a backlog of waiting aviators grew. The alternative was to qualify the pilots in SNJ Texans which had a lower threshold for WOD—even though most pilots had not flown the SNJ for four or five months. This process sent pilots to operational units without actually having carrier-landed the type they would fly while deployed with the fleet.

Between 1943 and 1945, about 17,000 pilots, signal officers and other personnel trained aboard the two carriers. Former U.S. President George H. W. Bush was among the pilots who learned to take off and land on the 500-foot long carrier decks. Between 8 and 12 pilots died during the training and about 100 planes now rest on the lake bottom after crashing during training missions.