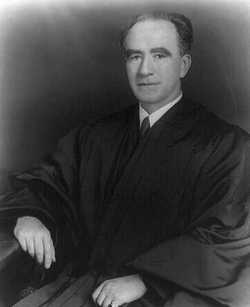 Former governor of Michigan Frank Murphy issued the dissenting opinion in the Supreme Court’s 1943 case, Hirabayashi vs. The United States of America. This case centered around Gordon Hirabayashi, a university student in Seattle and a devout Quaker. As a conscientious objector to military service, he had refused to report to the Japanese evacuation center as ordered by the laws produced to concentrate Japanese and Japanese-American people under US government regulation and control in an effort to negate subversion. Hirabayashi was arrested and convicted on May 16, 1942. The Supreme Court ruled on his case on June 21, 1943. The Court upheld his conviction. The dissenting opinion was made by Justice Frank Murphy:

“…I dissent, therefore, from this legalization of racism. Racial discrimination in any form and in any degree has no justifiable part whatever in our democratic way of life. It is unattractive in any setting but it is utterly revolting among a free people who have embraced the principles set forth in the Constitution of the United States. All residents of this nation are kin in some way by blood or culture to a foreign land. Yet they are primarily and necessarily a part of the new and distinct civilization of the United States. They must accordingly be treated at all times as the heirs of the American experiment and as entitled to all rights and freedoms guaranteed by the constitution.” The U.S. Supreme Court eventually reversed itself and essentially adopted the position described by Justice Murphy.

For more information see Sidney Fine, Frank Murphy: a Michigan Life, Ann Arbor, Mich.: Historical Society of Michigan, 1985. Available at Library of Michigan and 11 other Michigan Libraries according to MelCat.