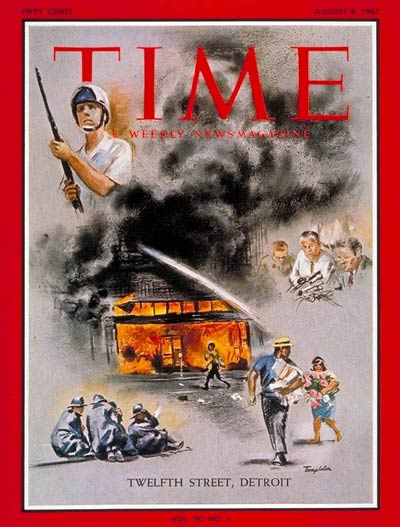 Detroit’s role as a major producer towards the war effort caused a dramatic increase in population. Rationing, however, created an acute shortage of housing for old and new residents alike. To alleviate the problem, wartime housing was constructed, but when it was decided that the housing would be desegregated, many whites became enraged. The increased racial tensions finally came to blows on Belle Island and continued throughout the city for the next thirty-six hours. Detroit police and Michigan state troopers were unable to control the riots themselves, so Detroit mayor Edward Jeffries, Jr. and Michigan governor Harry Kelly asked President Roosevelt for assistance. Federal troops in armored cars and tanks quickly squelched the uprisings, but when the rioting was done, thirty-four people were dead, including twenty-five African Americans, and more than 1800 people were arrested for looting and other incidents.

For another article, see Sanjana Malviya, This Week in Michigan History, Detroit Free Press, June 15, 2008, B.4.