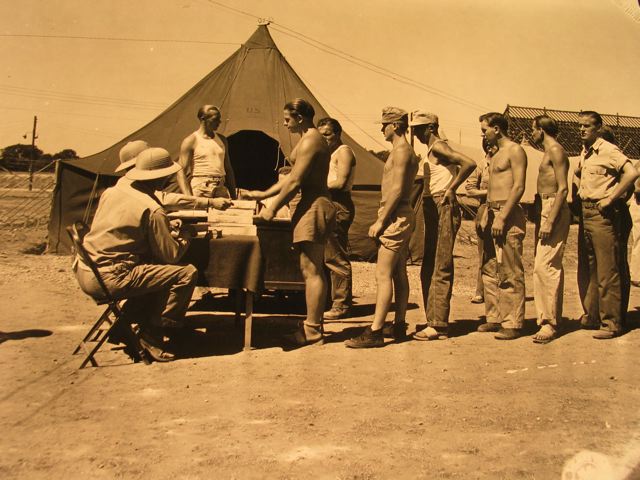 Soldiers line up at a makeshift prisoner-of-war camp at the Owosso Speedway race track during World War II [National Archives].

On May 30, 1944, the U.S. government brought 200 German prisoners to Camp Owosso and set up on an unused dirt racetrack at the corner of M-21 and Carland Road. Camp Owosso was one of 25 prisoner of war camps created in Michigan during World War II.

The public was not allowed to visit Camp Owosso, and a sign on M-21 alerted motorists that stopping or parking was prohibited. According to the Shiawassee County Historical Society, the Germans apparently enjoyed being prisoners away from the danger of the battlefield.

As they were transported to and from the camp for work in the fields, they would sing and wave happily to passers-by. The camp, however, received national attention when two prisoners walked away from a canning factory and met two women who were waiting in a car. A massive manhunt ensued and the following day all four were arrested near Colby Lake.

There were 32 POW Camps in Michigan. While the existence of the camps was not kept secret, it was not publicized for security reasons.

Newspaper clipping of German Prisoners of War loading up to pick grapes near Benton Harbor.

The Lonely Ones, Time, January 22, 1945. Tells the story of two local Owosso women who met German prisoners at a canning factory and ran off with them for a night, only to end up being prosecuted for treason and sentenced to federal prison.

Cottonwood Summer. Gary Slaughter. Nashville, TN : Fletcher House, c2004. When the army builds a German prisoner of war camp on the outskirts of a small Michigan town, citizens are outraged. Adding to the angst, two women assist a pair of POWs to escape — and are tried for treason. History, fiction, and humor blend into a heart-warming story of life on the 1944 home front. Note : book is available via ILL.