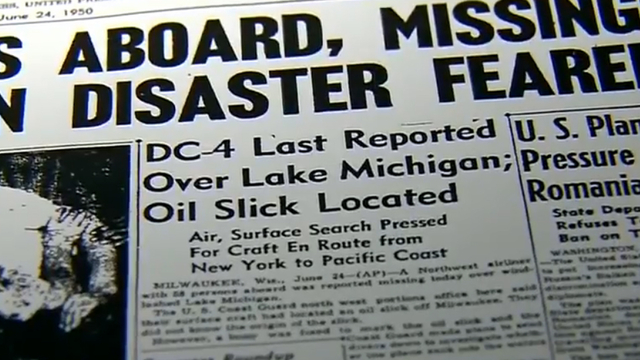 On June 23, 1950, a plane traveling from New York to Minneapolis crashed into Lake Michigan.

After more than 60 years, the plane is still missing.

The plane, a Northwest Airlines Douglas DC-4 carrying 55 passengers and 3 crew members, departed LaGuardia Airport at about 9:49 p.m. – and was last heard around 11:50 p.m., while over Lake Michigan.

Countless searches have turned up nothing, and the plane’s disappearance remains unsolved.

The crash was the worst aviation accident in American history at the time, with all 58 occupants presumed dead.

Forty minutes later, 2501 was instructed to drop to 3,500 feet to avoid an eastbound flight, which was experiencing severe turbulence over Lake Michigan.

Lind reported that he was over Battle Creek at 3,500 feet and would reach Milwaukee by 11:37 p.m. Central Time. Lind requested a further drop in his last transmission – but was denied.

Just before midnight Central Time, Flight 2501 was noted as overdue. All CAA radio station attempted to make contact with the plane – but never received a response.

By morning, it was clear that Flight 2501 had crashed. At 5:30 a.m., the plane was presumed lost, as search and rescue efforts intensified.

The U.S. Navy, U.S. Coast Guard and police forces from surrounding states, including Michigan were all involved in the search.

Searchers found an oil slick, light aircraft debris and an airline logbook floating in the lake many miles from shore.

Captain Carl G. Bowman, skipper of the U. S. Coast Guard cutter Mackinaw told the United Press bureau at Detroit by radiotelephone that “Tiny pieces keep floating to the surface all through the area.” He said his men found hands, ears, a seat armrest and fragments of upholstery. Fulford said the largest piece of wreckage was “no bigger than your hand.”

A Northwest Airlines DC-4 airplane with fifty-eight persons aboard, last reported over Lake Michigan early today, was still missing tonight after hundreds of planes and boats had worked to trace the craft or any survivors. All air and surface craft suspended search operations off Milwaukee at nightfall except the Coast Guard cutter Woodbine.

The airplane, a four-engine ‘air coach’ bound from New York to Minneapolis and Seattle, was last heard from at 1:13 o’clock this morning, New York Time, when it reported that it was over Lake Michigan, having crossed the eastern shore line near South Haven, Mich. The craft was due over Milwaukee at 1:27 A.M. and at Minneapolis at 3.23 A.M. If all aboard are lost, the crash will be the most disastrous in the history of American commercial aviation.

The plane carried a capacity load of fifty-five passengers and a crew of three, headed by Capt. Robert Lind, 35 years old, of Hopkins, Minn. In Minneapolis, Northwest Airlines said the craft was ‘presumed to be down,’ and that they were beginning notification of relatives of passengers. In his last report, Captain Lind requested permission to descend from 3,500 to 2,500 feet because of a severe electrical storm which was lashing the lake with high velocity winds. Permission to descend was denied by the Civil Aeronautic Authority because there was too much traffic at the lower altitude.

Over the past decade, searchers have covered more than 600 square miles of Lake Michigan, seeking the plane wreckage. 14 shipwrecks have been found, dating back to the 1800s, but no sign of Flight 2501.

In September 2008, Valaire Van Heest, a researcher investigating the crash, found an unmarked grave she believed contained the remains of victims.

She claimed they were buried in at St. Joseph-area cemetery without knowledge of the victims’ families.

In a 2008 ceremony at the cemetery, with 58 family members of crash victims, a black granite marker listing the 58 names of those that were lost were dedicated.

“I always wondered what happened to the human remains that washed ashore on the beaches of South Haven,” said van Heest, co-founder of (MSRA) Michigan Shipwreck Research Associates based out of Holland, Michigan. “I was disheartened to realize that the burial site has gone unmarked all these years.”

Another mass burial site was discovered in South Haven in 2015, also believed to be related to the crash.

On the 65th anniversary of the crash, a remembrance service was held at the grave site. After each name was read, a bell was rung.

“Fifth-eight people’s remains may be buried there,” said van Heest. “I feel things are working to put a final closure to this accident.”

The area of Lake Michigan where 2501 disappeared is infamously known for its mysterious string of tragic and unexplained events.

You can read more about the Michigan Triangle legend here.