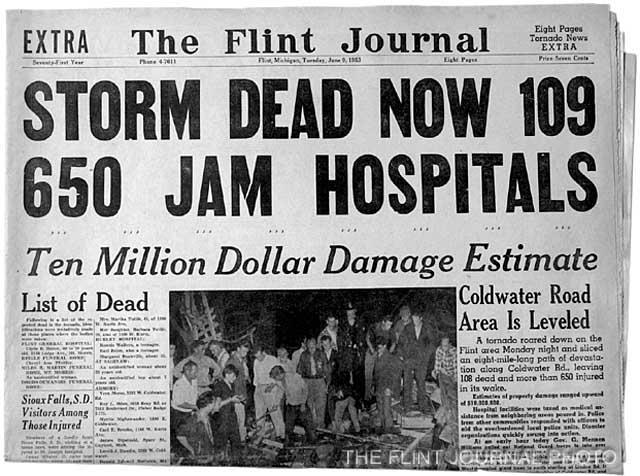 before weather sirens, doppler radar, and tornado warnings, the most deadly tornado in U.S. history – until the 2011 tornado in Joplin, MO killed 120 – occurred near Flint, killing 116 individuals and injuring 844.

The destruction was unbelievable. Beecher High school was flattened, the North Flint Drive-In a total loss. Homes and businesses fell before the twisting blasts. Hundreds of casualties were reported at Drive-In theater.

Injured residents at Hurley hospital said that the storm struck without warning. Families were in their homes, listening to the radio, reading papers, watching television or eating dinner when the whirlwinds struck.

When the roar of the twister became audible, it was too late to escape.

The Flint-Beecher tornado was rated as an F5, the highest rating on the Fujita scale of damage. Winds were likely in excess of 200 mph as the 800 yard wide tornado moved on its 27 mile path through Genesee and Lapeer counties. Approximately 340 homes were destroyed, 107 homes had “major damage”, and 153 homes had “minor damage”. In addition farms, businesses and other buildings were destroyed and had damage. These totaled another 50 buildings destroyed and 16 with damage. The damage was estimated around $19 million (about $160 million adjusted for inflation).

So great a number were killed by the monstrous tornado that the National Guard Armory building, along with other shelters, was turned into a temporary morgue. The scene of bodies pouring into the Armory (as an intermittent light rain poured outside) was incredibly bleak and horrifying, especially for the families and friends of the victims. At least 100 people waited outside into the rainy night before they could move inside to try and identify the bodies.

Captain James Berardo of the State Police warned the people that the terrible tornado had horribly battered some victims and the scene inside would be gruesome. Out of the 116 people killed, 55 were under 20 years old and out of those 55, 5 were less than a year old, 32 were under 10 years old and the remaining 18 were under 20 years old. As bad as it was to have a loved one killed from the storm, many families suffered multiple deaths. As many as 20 families reported multiple deaths, with unimaginable fates befalling the Gensel and Gatica families – each losing five members. Of the many injured in the tornado, the last two injured left the hospital nearly 5 months after the tornado in November of 1953. One of was a girl that suffered from a coma.

There were many heroes on that night and in the days, weeks and months that followed. First aid, food and clothing were quickly made available to the tornado victims. The State Troopers and National Guard worked feverishly after the tornado struck. Within 12 hours, all 684 of the available National Guard personnel were mobilized and on duty at the tornado disaster. This had been the second time they had been mobilized since WWII, the first occasion being the floods of 1947. The Red Cross went into action fast, falling back on their education and their experience in the 1947 flood. Most of the Red Cross personnel did not have to be alerted and reported to their jobs soon after the disaster hit. In one day, the Red Cross handled 12,000 messages… mainly from worried relatives and friends across the nation.

Beecher was able to rebuild thanks in most part to the Flint community. Flint supported a “Red Feather” campaign to gather relieve and rebuilding funds. With the help of both the community money and the Red Cross, Beecher was able to rebuild. During the late summer of 1953, one of the nation’s largest “Builder Bees” at the time, was held. This was a community supported project, which volunteers help to rebuild some of the homes that were lost in the tornado.

Beecher Tornado of 1953 courtesy of the Flint Public Library.