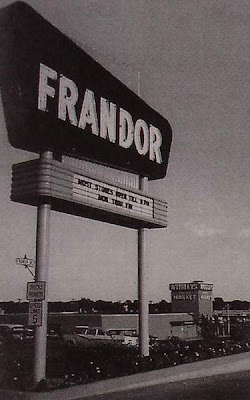 A sign that once stood at the north end of Frandor Center welcomes mid-century shoppers into the vast – and totally for free –  parking area. It could accommodate nearly five thousand autos. Photo from www.lostlansing.com 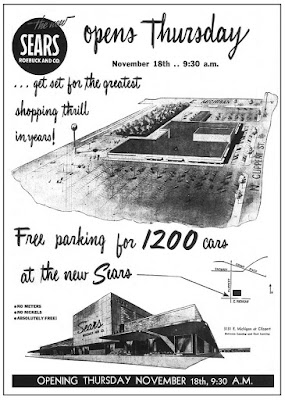 Advertisment announcing the official grand opening of Sears, which took place in November of 1954. Reading along, one can pick up on the glowing hyperbole that was typically used to promote new shopping centers and stores in this era. Potential patrons were promised  “The greatest shopping thrill in years!”. Advert from The Lansing State Journal 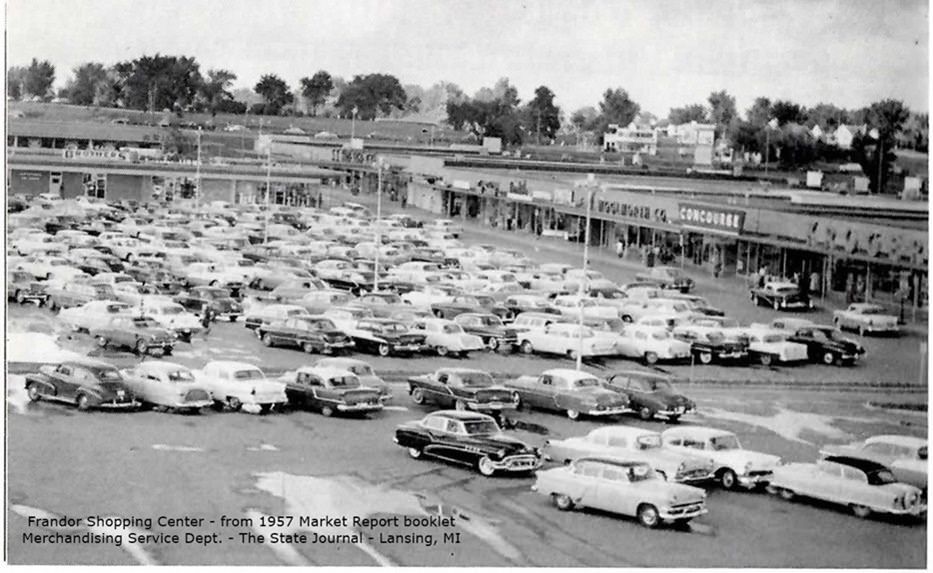 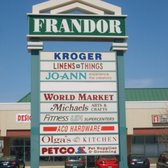 Metropolitan Detroit’s Northland Center opened, in March 1954, as the first regional shopping center in Michigan. The Wolverine State’s second regional-class retail complex was built on a 55 acre site, located 2.3 miles east of the Michigan State House, in suburban East Lansing. The parcel had previously been occupied by the 9-hole Glenmoor Golf Course.

Developed by Lansing’s Francis “Jake” Corr, the single-level, open air complex was named Frandor Center (this after FRANcis and his wife DORothy). The facility was officially dedicated in November 1954. It consisted of a linear strip center with the open-air Frandor Mall Court at its center.

A (19,200 square foot) Kroger supermarket opened for business November 2, 1954, followed by an F.W. Woolworth 5 & 10, which debuted on November 4. A 1-level (175,200 square foot) Sears welcomed its first shoppers November 18 of the same year. It was a freestanding structure, not technically part of the shopping hub, which served as a “shadow anchor”.

The National General Corporation Spartan Twin Theatre showed its first features on October 11, 1967. It was built at the northwest corner of the mall site, on the former putt-putt golf course. The venue re-opened, as the Mann Theatres Spartan 3 Theatre, on October 20, 1978 and was permanently shuttered in February 1994. Kiddy Land was dismantled in 1981.

Commercial competition for Frandor Center had arrived in the late 1960s. Lansing Mall {6 miles west, in Eaton County} and Meridian Mall {4.3 miles southeast, in Ingham County} opened for business in 1969.

As a competitive measure, Frandor Center was renovated in 1970. The west-facing storefronts were fitted with a glass-enclosed walkway and a Center Court was created from the Frandor Mall Court. The official name of the complex was changed to Frandor Mall. Soon after this renovation, the Federal store closed for good. Its vacant space became a relocated Kroger.

With two regional-class rivals in its vicinity, Frandor Mall lost its prominence as the area’s foremost shopping complex. By the mid-1990s, it had become dilapidated and was nearly vacant. A redevelopment project got underway in April 1998, initiated by a joint venture of the original developer, Lansing’s Frandorson Properties, Farmington Hills, Michigan-based Lormax Stern and First Chicago NBD Real Estate Services.

The Center Court area was demolished, along with the enclosed walkway. The remaining East Mall structure was returned to its original, open-air format, with new storefronts constructed. Four big-box stores were added north and south of the existing Kroger, along with a seven-store strip plaza on the south end. A power center was created which surrounded a central parking area.

The entire Linen’s ‘N Things chain went out of business in late 2008. Its space at Frandor Center sat vacant for over 4 years. It re-opened, as a Guitar Center, February 7, 2013. CompUSA also went bust in 2008. Its space was assumed by A.J. Wright discount apparel in April 2010. This store was short-lived. It was shuttered in February 2011 and re-opened, as a HomeGoods, in March of the same year.

Since Northland Mall has closed, the Frandor Center can now claim the title of Michigan’s oldest operating  regional mall.

Mall Hall of Fame, including comments on the history of the mall.