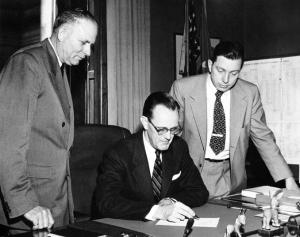 On July 1st of 1955, “Michigan State College of Agriculture and Applied Science” changed its name to “Michigan State University of Agriculture and Applied Science.” This was the fruit of several years’ of writing letters and dealing with the University of Michigan’s complaints. They were apparently concerned that the names were too similar! MSC had begun seeking university status in the early 1950s, arguing that their diverse variety of programs indicated that the college had grown into a university. In Michigan law, “University” isn’t specifically defined, but there is a list of what they consider to be Michigan universities. It is assumed that to be considered a university an institution must offer a wide variety of programs and grant four year degrees, but this does not seem to be specifically laid out anywhere.

Still, MSC had to propose the Michigan State University Bill in the hopes of making the name change legal. A week before the state House of Representatives voted on the bill, the University of Michigan submitted a 26 page brief against the proposal. It didn’t work, and in April, the Senate voted 23-2 in favor of the name change. The change was effective on July 1st, 1955.

Still quite a mouthful, the name was shortened to the current “Michigan State University” in 1964.