One evening in early December, 1955, I was sitting in the front seat of the colored section of a bus in Montgomery, Alabama.  The white people were sitting in the white section.  More white people got on, and they filled up all the seats in the white section.  When that happened, we black people were supposed to give up our seats to the whites.  But I didn’t move.  The white driver said, “Let me have those front seats.”  I didn’t get up.  I was tired of giving in to white people.

The bus on which Rosa was riding that day is now on display at the Henry Ford Museum, in Dearborn. We can view the exact location of Rosa’s seat, thanks to a court record. This image depicts an exhibit from Civil Case 1147, Browder, et al v. Gayle, et. al which was filed, during 1955, in the U.S. District Court for the Middle District of Alabama, Northern (Montgomery) Division. Locate Rosa’s seat next to a window, on the right side of the bus, five rows back from the front door. After Rosa Parks defied the law in Montgomery, Alabama – refusing to give up her bus seat to a white man – she was arrested, fingerprinted and convicted after a very short trial.  Her actions effectively launched the modern-day civil rights movement. 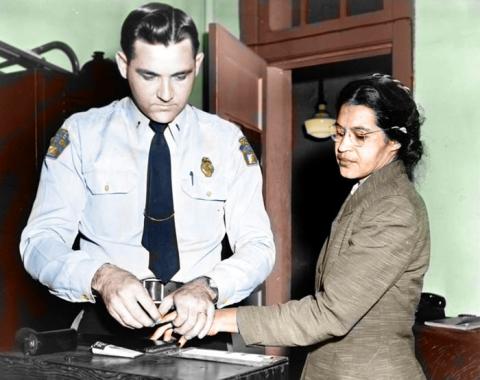 In 1957 Rosa Parks would move to Detroit, Michigan