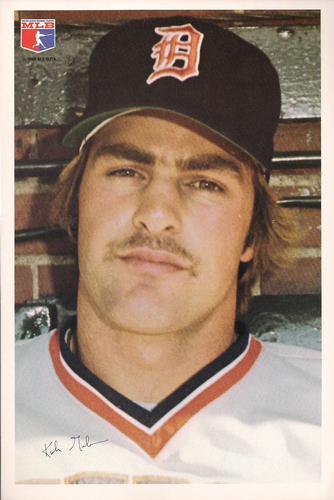 Gibson was born in Pontiac, Michigan on May 28, 1957, grew up in Waterford, Michigan (attending Waterford Kettering High School), and attended Michigan State University where he was an All-American wide receiver in football. Gibson’s college football career was distinguished by leading the Spartans to a tie for the Big Ten title, setting school and conference receiving records, starring in the Hula Bowl and Senior Bowl and making several All-America teams. It was at the suggestion of Spartan football coach Darryl Rogers that Gibson played collegiate baseball. Gibson played only one year of college baseball, but managed to hit .390 with 16 homers and 52 RBIs in 48 games. He was drafted by both the Detroit Tigers baseball team (1st round) and the St. Louis Cardinals (now the Arizona Cardinals) football team (7th round). He chose baseball.

For the complete story, see Dan Holmes, “When Kirk Gibson gave up the game he loved to play baseball for the Tigers”, Detroit Athletic Company, February 2, 2014.