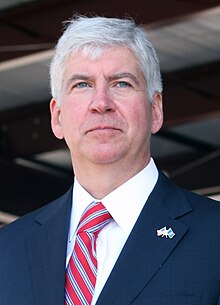 On Aug. 19, 1958, Rick Snyder was born in Battle Creek. Snyder graduated from Lakeview High School and went on to earn three college degrees by age 23. He started his professional career at Coopers & Lybrand (now PricewaterhouseCoopers).

After becoming a partner, the company moved him to Chicago to run the mergers and acquisitions section. While there, he met Ted Waite, the head of a growing computer company called Gateway, who recruited Snyder to manage the operation.

When Gateway moved to California, Snyder moved back to Michigan and got into venture capital.

In 2009, Snyder announced his candidacy for Michigan governor, winning a five-way Republican primary in 2010 and then winning the governorship in November against Democratic Lansing Mayor Virg Bernero.   During his campaign, he described himself as “one tough nerd”.

On March 16, 2011, Snyder signed a controversial bill into law that gave increased powers to emergency managers of local municipalities to resolve financial matters. The bill was repealed by voter initiative in November 2012. However, weeks later in December 2012 Snyder signed a revised version of the bill back into law.

It was hoped that emergency managers would help financially troubled cities, such as Detroit, recover.   Although Detroit has made progress, the emergency manager appointed to Flint led to a horrible water crisis.    Because of the Flint Water Crisis, Snyder’s approval ratings have dropped below 40 percent.