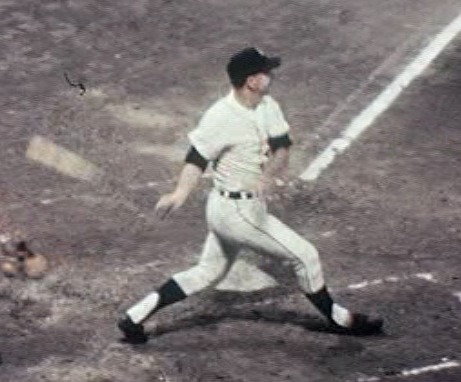 Norm Cash became the first Detroit Tiger to hit a ball out of Tiger Stadium.

Cash spent 15 seasons in a Detroit uniform, 1960 through 1974. His 373 home runs, which still ranks him second to Kaline on the club’s all-time list, and batting title in 1961 are only part of the story. A gamer and a showman, Cash regularly doffed his cap to the crowd, flipped balls into the stands, and fielded his position with flair and grace. He was a master at running down foul flies hit high over his head. He was one of the few players not to wear a batting helmet during his career. He strode to the plate in his familiar bandy-legged way, a cloth cap jammed down on his head, spitting tobacco juice and twirling three bats over his head. More often than not, he made the umpire and catcher smile as he set himself in the batter’s box. Once he offered the ump a pair of novelty sunglasses with battery-operated wiper blades. On another occasion, as Nolan Ryan was one out away from completing a no-hitter at Tiger Stadium, he came to the plate brandishing a table leg.

“Normy was one of the top five ballplayers, as far as human goodness was concerned,” Lindell A.C. owner Jimmy Butsicaris once said. “He’d think nothing of taking a few balls down to Children’s Hospital and autographing them for kids. When it came time to speak at some charity dinner, Norm was always there. He wasn’t like a lot of these other guys, where the first thing out of their mouths was ‘How much’? Ol’ Normy just said, ‘Where and when’? when it came to giving to other people.”

When Cash retired in 1974, he had hit more home runs than any left-handed hitter in American League history except for Babe Ruth, Lou Gehrig, and Ted Williams. In retirement, he also was free to “fess up” about his magical ’61 season. Turns out he had been doctoring his bats with a mixture of glue, sawdust, and cork. He played a couple seasons with Little Caesar’s pro softball and also did some work in the broadcast booth. Mostly he just continued to enjoy life, especially on his 33-foot cabin cruiser, which he named the “Stormin’ Norman.”

For another Norm Cash story, see Bill Dow, “When Norm Cash took a table leg to the plate for the Detroit Tigers”, Detroit Athletic Company, November 1, 2011.

Richard Bak, “Norm Cash was the happiest Tiger of them all”, Detroit Athletic Company, October 1, 2013.