At one time in Michigan, if you were black, cemeteries could flat-out refuse to bury your loved ones. Like racially restrictive covenants that prevented black families from purchasing property in certain neighborhoods, some cemeteries made it part of their policy to bury only white bodies in their grounds. Others just humiliated their black customers, offering inflated pricing, rude service, and their shabbiest plots.

Cemetery discrimination in Michigan continued until well into the 1960s. In one infamous case, Native American World War I Veteran George Vincent Nash was buried with his white wife at White Chapel Memorial Park — only to be promptly disinterred, because his burial there violated the cemetery’s whites-only policy. The Michigan Court of Appeals finally ruled in 1966 that cemeteries could not restrict plot purchases by race, under the same U.S. Supreme Court precedent that had ruled restrictive real estate covenants unconstitutional in 1948.

Charles Diggs Sr. decided to do his part to help his fellow African Americans by opening a funeral home in 1921 and founding the state’s first black-owned cemetery, Detroit Memorial Park, in 1925.  The cemetery, located in Warren, provided a place for black patrons to bury and grieve with dignity. Singer Florence Ballard of The Supremes, the novelist Donald Goines, and Detroit’s “real McCoys,” inventor Elijah and renowned club woman Mary McCoy, are all buried at Detroit Memorial Park. 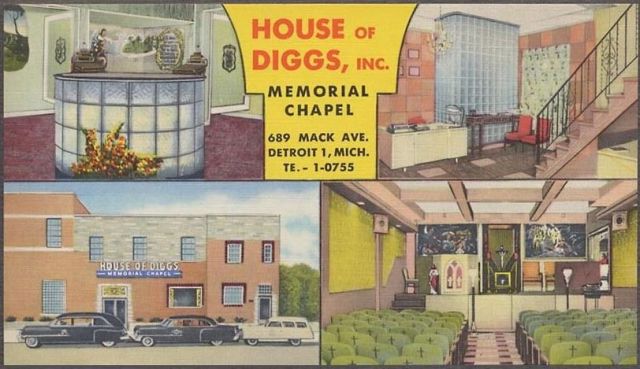 Charles Diggs Sr. ,a mortician and owner of the the House of Diggs Memorial Chapel, later became the first African American Democrat elected to the Michigan Senate. He was also founder of the Michigan Federated Democratic Clubs, which encouraged many black Michiganders to switch their party allegiance from Republican to Democrat — and, in some cases, to run for office.

His son Charles Diggs Jr. made more history in 1955 when he was elected to the U.S. House of Representatives, becoming the first black person from Michigan to serve in the U.S. Congress. Diggs Jr. was also one of the original 13 founders of the Congressional Black Caucus, along with John Conyers, Shirley Chisholm, and Charlie Rangel, and was the Caucus’s first chairman.