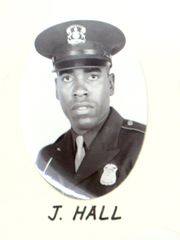 Jack Hall became the first African-American Michigan State Police trooper when he was sworn in on Aug. 18, 1967.

The Benton Township patrolman had tried to enlist before, but the white recruiter in Paw Paw had told him — incorrectly — that his glasses disqualified him. Six years later, at age 26, he reapplied and was accepted because his vision was correctable to 20/20.

Hall was first posted to Flint, though his 25-year career would also take him to Niles, Detroit, Ionia and Lansing and include some State Police recruiting work. He retired as captain in 1992.

He then worked for the state Department of Corrections internal affairs division for a decade.