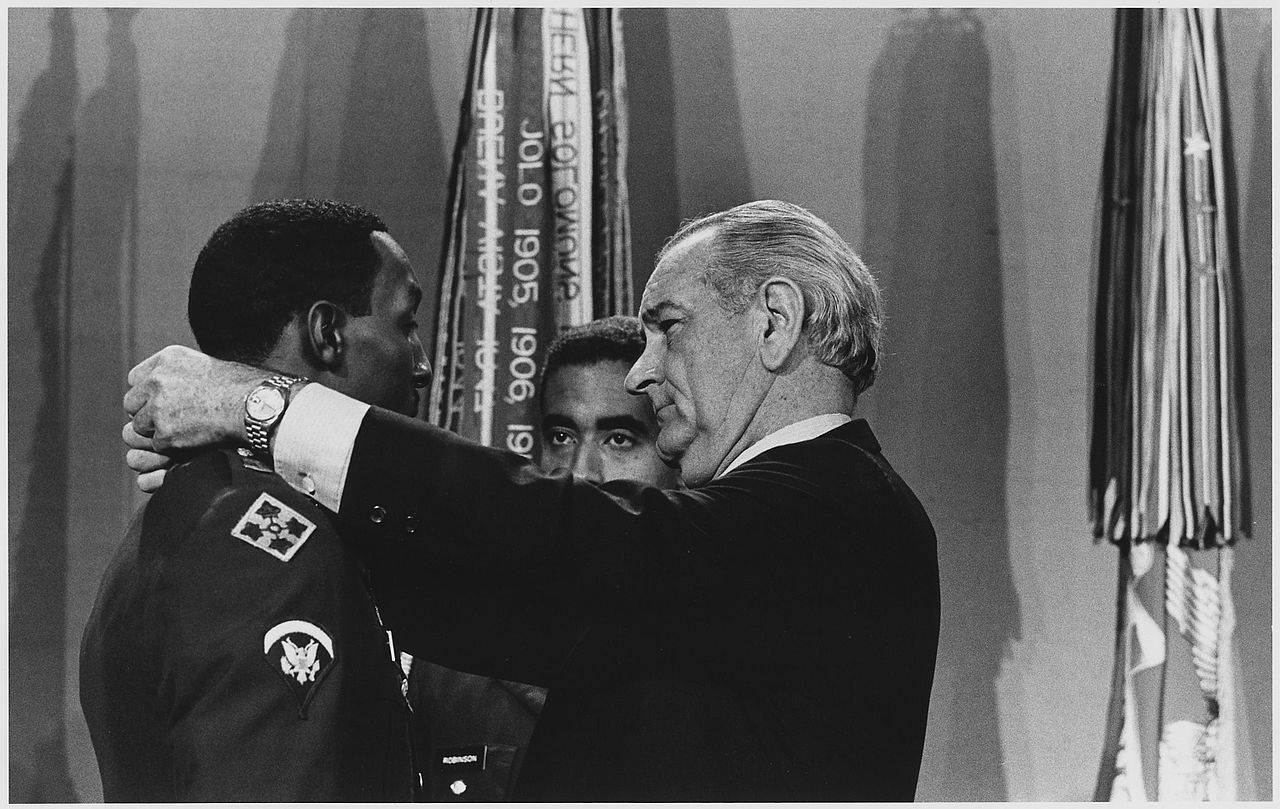 On Jan. 15, 1968, Sgt. Dwight H. Johnson of Detroit earned the Congressional Medal of Honor during the Vietnam War. From the citation:

“For conspicuous gallantry and intrepidity at the risk of his life above and beyond the call of duty. Specialist 5 Johnson, a tank driver with Company B, was a member of a reaction force moving to aid other elements of his platoon, which was in heavy contact with a battalion size North Vietnamese force. Specialist Johnson’s tank, upon reaching the point of contact, threw a track and became immobilized. Realizing that he could do no more as a driver, he climbed out of the vehicle, armed only with a .45 caliber pistol. Despite intense hostile fire, Specialist Johnson killed several enemy soldiers before he had expended his ammunition. Returning to his tank through a heavy volume of antitank rocket, small arms and automatic weapons fire, he obtained a sub-machine gun with which to continue his fight against the advancing enemy. Armed with this weapon, Specialist Johnson again braved deadly enemy fire to return to the center of the ambush site where he courageously eliminated more of the determined foe. Engaged in extremely close combat when the last of his ammunition was expended, he killed an enemy soldier with the stock end of his submachine gun. Now weaponless, Specialist Johnson ignored the enemy fire around him, climbed into his platoon sergeant’s tank, extricated a wounded crewmember and carried him to an armored personnel carrier. He then returned to the same tank and assisted in firing the main gun until it jammed. In a magnificent display of courage, Specialist Johnson exited the tank and again armed only with a .45 caliber pistol, he engaged several North Vietnamese troops in close proximity to the vehicle. Fighting his way through devastating fire and remounting his own immobilized tank, he remained fully exposed to the enemy as he bravely and skillfully engaged them with the tank’s externally-mounted .50 caliber machine gun; where he remained until the situation was brought under control. Specialist Johnson’s profound concern for his fellow soldiers, at the risk of his life above and beyond the call of duty are in keeping with the highest traditions of the military service and reflect great credit upon himself and the United States Army.”

He is believed to be the first soldier from Michigan and the first African American to receive the nation’s highest military honor for service in Vietnam.

Sadly, after returning from Vietnam, Johnson had difficulty adjusting to post-war life and was diagnosed with a depression caused by Post Vietnam adjustment problems, often referred to now as PTSD. In April 1971, he was shot and killed during an altercation/robbery at a convenience store near his home in Detroit. He is buried in the Arlington National Cemetery.