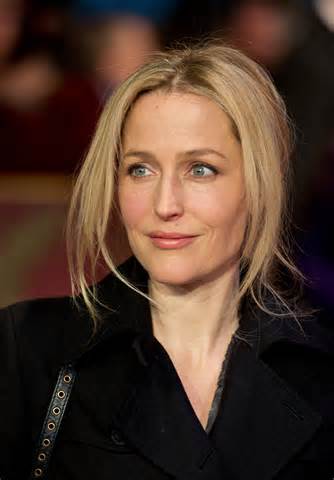 Gillian Anderson was born on August 9, 1968. Here are some facts about the actress:

1. Anderson was born in Chicago, and lived in the United Kingdom for a while before her family moved to Grand Rapids when she was 11 years old.

2 Following the move to Grand Rapids, Anderson went through a rebellious stage as a teenager; experimenting with drugs, dating a much older boyfriend, and cultivating a punk appearance (dyeing her hair various colors, shaving the sides of her head, sporting a nose piercing and an all-black wardrobe).  She was put in therapy at the age of 14. Anderson listened to bands such as Dead Kennedys and Skinny Puppy. She was voted by her classmates as “class clown”, “most bizarre girl” and “most likely to be arrested”. She was, in fact, arrested on graduation night for breaking and entering into her high school (City High School) in an attempt to glue the locks of the doors.[She later managed to reduce the charges to  trespassing.

3. Fortunately, she developed an interest in theater and acting while in Grand Rapids.  After graduating from high school in 1986, she attended The Theatre School at DePaul University in Chicago, where she earned a Bachelor of Fine Arts in 1990. Anderson also participated in the National Theatre of Great Britain‘s summer program at Cornell University. To support herself financially during her student years, she worked at the Goose Island Brewpub in Chicago. After Anderson became famous, the brewery named one of their beers after her – a Belgian Style Farmhouse Ale, simply called “Gillian”.

4. Anderson is bidialectal, meaning that, because she grew up in areas with vastly different ways of speaking, she shifts accents depending on the person to whom she is talking (i.e., she speaks with a British accent in the U.K., and with a Midwestern accent in the U.S.).

5. She almost didn’t get the role of Dana Scully on TV because the network wanted to cast someone with more experience and sex appeal. The series’ creator stood up for her, and she eventually got the part.

6. She is comfortable with both theater and tv roles.   Check the wikipedia list for a long list of credits.