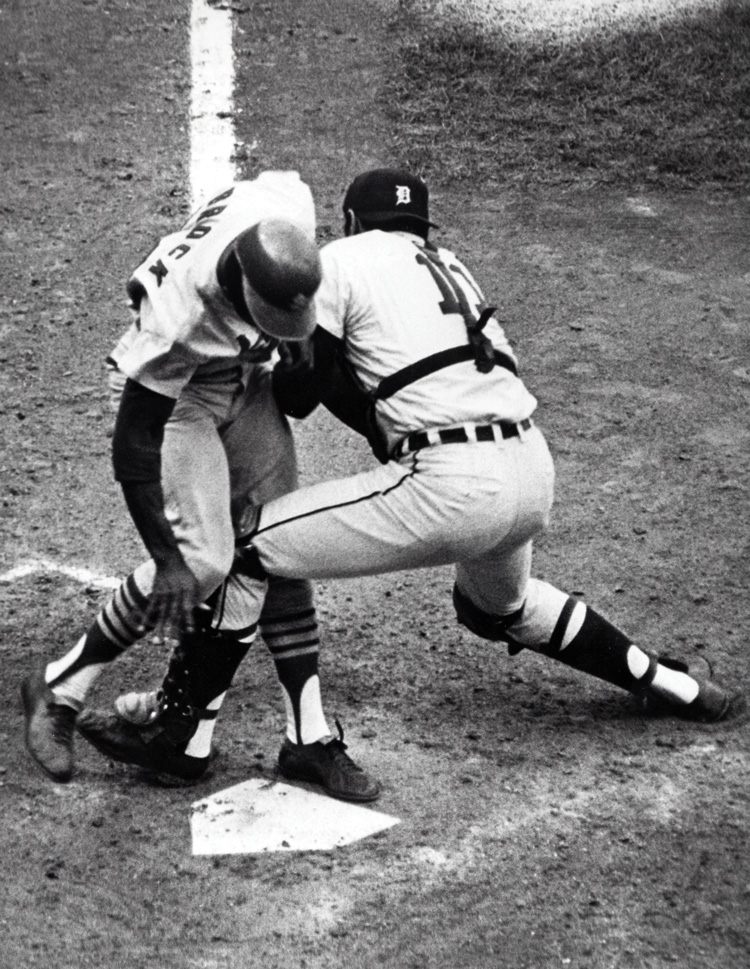 In the fifth game of the 1968 World Series, with the Tigers trailing the St. Louis Cardinals three games to one, it was blindingly obvious what they had to do to stay alive: win. On Oct. 7, a Monday afternoon, Tiger Stadium was packed with hopeful fans, knowing full well that the Tigers were the series underdogs. With Mickey Lolich on the mound (he was later named World Series MVP), things didn’t augur well for Detroit as the Cardinals picked up three runs in the first inning. The Tigers scored a pair of runs in the fourth inning and three more in the seventh. But something happened in the fifth inning that could have turned the tide in the Cardinals’ favor.

Lou Brock, a lightning-quick base runner who stole so many bases in his career that he was dubbed the Base Burglar, smashed a double, followed by Julian Javier’s single. Brock raced toward home plate, but an alert Willie Horton scooped up the ball and sent a rocket of a throw to catcher Bill Freehan. As this shot by Detroit Free Press photographer Tony Spina reveals, Brock came within a hair’s breadth of being safe. “He shoulda slid,” Spina commented, but hometown fans were relieved he didn’t.

The Tigers beat the Cardinals, 5-3, that afternoon, and went on to triumph in the next two games in St. Louis, with Freehan making the final play of the series, a pop-out. While St. Louis licked its wounds, Detroit went mental. Confetti rained down from skyscrapers, car horns blared, and revelers poured into the street. It was just a year before when the city was torn asunder by a riot, and winning the World Series was precisely the invigorating tonic Detroit needed.

This photo shows the celebration in downtown Detroit after the World Series win.