In the fall of 1969 a strange and mysterious rumor was circulating on the fringes of college campuses in the Midwest: Paul McCartney of the Beatles was dead.

According to the rumor, McCartney had died three years previously in a horrific car crash. His death—so the story went—was covered up, the surviving Beatles found a double to replace him, and ever since had been hiding clues in their songs and album covers that revealed the truth about their ex-bandmate’s grisly fate.

No one knows for certain how the rumor started, or where. But in mid-October it exploded on to the national scene, sweeping the ranks of youth from coast to coast in a matter of days. Suddenly it seemed as if everyone under the age of 30 was either debating the possibility of McCartney’s demise or poring over their Beatles records, searching for clues.

What many do not know is that the rumor might not have come to their attention at all except for a mischievous young U-M natural resources student named Fred LaBour. Forty years ago he was an jocular staff writer for the Michigan Daily who had been assigned to review “Abbey Road,” the Beatles’ latest album. 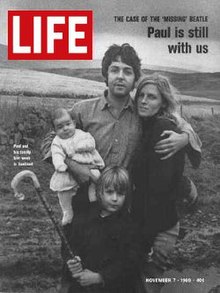 His story on October 14, 1969 that “Paul is Dead and presenting 14 clues “electrified the campus. The Daily sold out its entire run by mid-morning, and a second printing was ordered to meet demand. And before the story had run its course, Time and Life also featured the rumor on its covers.