“Soldiers are Cutting Us Down; Four Dead in Ohio, Including a Former MSU Student” 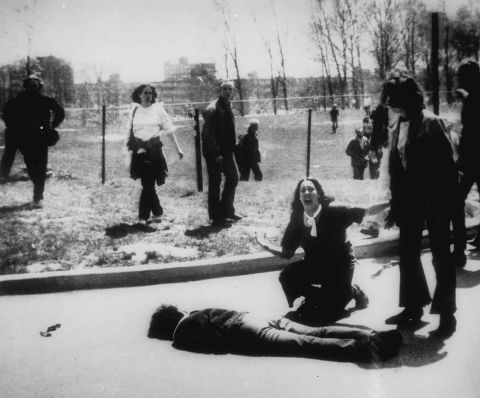 In this Pulitzer Prize-winning photo, taken by Kent State photojournalism student John Filo, Mary Ann Vecchio can be seen screaming as she kneels by the body of a slain student, Jeffrey Miller — a former MSU student on May 4, 1970 in an event commonly called the ‘Kent State Massacre’ .  Miller had transferred to Kent State only four months earlier.

Students were protesting the Vietnam war spilling into Cambodia and the U.S. involvement. It was called a peace rally but after 4 days of student unrest and some rioting, the Ohio National Guard ended up firing almost 70 rounds of ammunition. Out of approximately 300 students at the rally, 13 were shot and four were killed.

According to cincinnati.com, “In 1968, (Jeffrey) followed his big brother to Michigan State University and even joined his fraternity, Phi Kappa Tau. He studied architecture, played it straight, and dressed in buttoned-down shirts and slacks”.

The article continued, “In August, Jeff joined 400,000 other young people at music festival Woodstock…..When he went back to Michigan State in the fall, he quit the fraternity, and changed his major to psychology”.

After MSU’s winter break, Miller decided to move on, since his brother had graduated from MSU and wasn’t around anymore. Jeffrey decided to transfer to Kent State in early 1970.

May 1, protests and demonstrations began at Kent State. As nighttime approached, some rioting occurred, with broken windows, a street fire, and objects being thrown at police.

May 2, more protests and the National Guard was brought in.

May 3, some cleanup was attempted, but eventually more vandalism took place, with the National Guard dispensing tear gas.

Monday, May 4, a planned protest began at noon on campus. After students began throwing tear gas back at the soldiers, they were chased out of the area…at 12:24 pm the shots were fired and four students lay dead.

On the heels of this event, around four million college students throughout the country went on strike and walked out of classes and off campus.

There is much, much more to this historic event, and you can read all about it HERE. In reading this, you may see the similarities of what’s going on in our country now…..fifty years later.