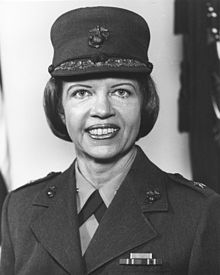 Margaret Brewer, a native of Durand in Shiawassee County, became the Marine Corps’ first female brigadier general on May 11, 1978.

She was inspired to join the Marines when, in high school, she heard a speech by the men who raised the American flag at Iwo Jima. After graduating from the University of Michigan, she joined the Corps as a second lieutenant.

In 1966, she was promoted to lieutenant colonel, the most senior rank women could hold at the time. In 1973, she was named the seventh — and last — director of the Women Marines.

After President Jimmy Carter successfully nominated her for appointment to brigadier general, she became director of public affairs, a job she held until her 1980s retirement.