Orville Hubbard, an infamous segregationist, officially stepped down on Jan. 1, 1978, after 36 years as mayor of Dearborn.

Hubbard had a stroke on Nov. 3, 1974, and several mayors pro tem actually ran the Wayne County city until his term ended, according to municipal spokeswoman Mary Laundroche.

Hubbard had the longest continuous reign of any U.S. mayor and successfully beat back two recall attempts, including one after the stroke.

The nattily dressed workaholic — who named one of his sons after Dearborn’s most famous native son, Henry Ford — started life as a farm boy near Battle Creek.

Though credited with keeping taxes down and delivering such city services as speedy snow removal and New Year’s Eve police rides for people too drunk to drive, Hubbard is best known today for his racial bigotry. For example, he twice prevented the construction of large housing developments that would have allowed black residents into Dearborn. He was indicted (and acquitted) for violating the Civil Rights Act in 1963 and suggested, after touring post-riot Detroit in 1967, that Dearbornites learn to shoot.

The city’s slogan was “Keep Dearborn clean,” with clean understood to mean white. At the time of Hubbard’s death in 1982, 0.001% of Dearborn’s 90,660 residents were African American.

“If you have integration, first you have kids going to school together, then next thing you know, they’re grab-assing around, then they’re getting married and having half-breed kids,” Hubbard told the New York Times in 1968. “Then, you wind up with a mongrel race. And from what I know of history, that’s the end of civilization.” 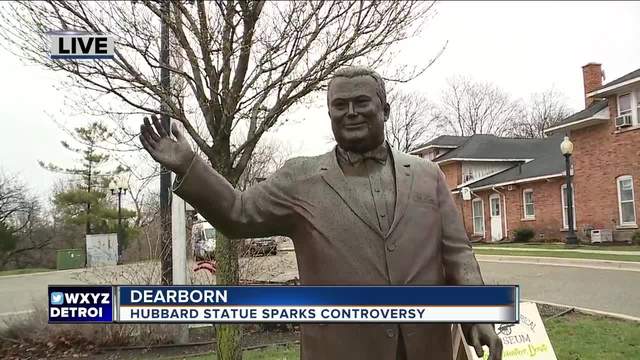