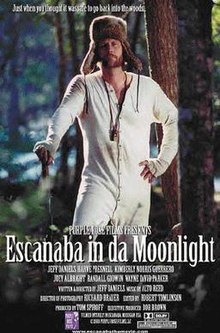 Escanaba in da Moonlight is a 2001 movie starring Jeff Daniels. It is a comedy about hunting and hunting traditions and is set (and filmed) in the Escanaba, Michigan area. The film is known for its spectacular usage of upper peninsula Chickens and deer. The movie is the film adaptation of the play of the same name, which premiered at Jeff Daniels’ Purple Rose Theatre in Chelsea, Michigan.

A significant portion of the movie involves references to elements of “Yooper” (slang reference to residents of the U.P. or Upper Peninsula of Michigan) and broader Michigan culture. Some references are obscure to viewers unfamiliar with this culture and might be considered in-jokes.

For the moment the movie is available for free via YouTube.