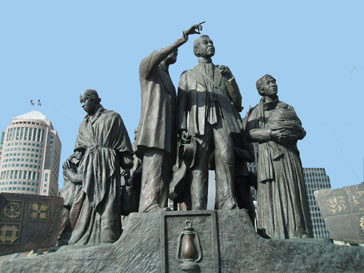 In honor of Detroit’s role in the Underground Railroad, the development group Detroit 300 commissioned two sculptures by Ed Dwight, one in Detroit and the other in Windsor and dedicated the monuments on this day in 2001.

Several routes of the Underground Railroad went through Michigan. This statue commemorates the route through Detroit. Another favorite crossing point was south of Detroit near where Amherstburg, Ontario is located. This is, perhaps, the narrowest Point in the Detroit River. And by the mid-1830s, there was a modest population of former slaves living there who aided other to escape to freedom.

The sculpture in the United States, Gateway to Freedom, shows six fugitive slaves ready to board a boat to cross to Canada. The gentleman pointing from Detroit to Windsor is George DeBaptist, a Detroit resident who helped slaves to get across the river to freedom. The monument in Windsor features a former slave raising his arms to celebrate his emancipation while a Quaker woman offers assistance to a woman and her child. Another child in that monument looks back toward Detroit. The plaque associated with this monument mentions several Detroit institutions that were active in the Underground Railroad and continue to serve the city’s population in the Twenty-first century: Bethel African-Methodist Episcopal Church and Second Baptist Church

Statuary and Memorial Commemorating Detroit’s Role in the Underground Railroad at the Detroit River in Hart Plaza in downtown Detroit.