The Lansing plant was the longest-operating automobile factory in the United States when it closed on May 6, 2005, and one of General Motors last assembly plants where vehicle bodies were made at one plant, and then trucked to another plant to be finished] General Motors began demolition of the plant in the spring of 2006, and demolition was completed in 2007. A new plant at nearby Lansing Grand River Assembly, which began production in 2001, as well as the Delta Township called Lansing Delta Township Assembly assumed some operations when it began production in 2006.

Lansing Car Assembly (LCA) began in 1901 when Ransom E. Olds moved his Olds Motor Works to the city. He set up his plant on the site of the fairgrounds next to the Grand River. This plant in downtown Lansing would later be known as Lansing Car Assembly – Chassis Plant. 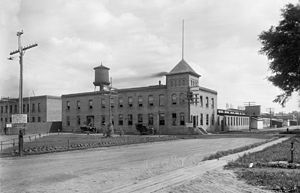 The plant along Verlinden Avenue, on Lansing’s border with Lansing Township, opened in 1920 as a factory for Durant Motor Works. After the demise of Durant in 1931, the plant remained closed until GM purchased it in 1935. It restarted production for GM’s Fisher Body division, later becoming the Buick–Oldsmobile–Cadillac factory. Its final name was Lansing Car Assembly – Body Plant.

The last cars that Lansing Car Assembly produced were the Chevrolet Malibu/Chevrolet Classic, Oldsmobile Alero, and Pontiac Grand Am, which was the final vehicle built there. The plant built the very last Oldsmobile, a 2004 Alero.