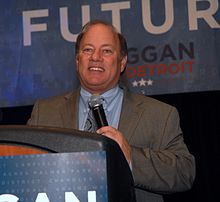 Michael Edward Duggan (born July 15, 1958) is an American politician and businessman. He was elected the 75th mayor of Detroit, Michigan in 2013, receiving national attention in part for being the first white mayor of the majority-black city since the early 1970s, when Detroit’s population still had a white majority.

In 2012 Duggan resigned his position at the DMC and moved from the suburb of Livonia to the city of Detroit, intending to run for the office of mayor the following year.[6] However, he failed to qualify for the ballot because he filed less than a year after establishing residency in the city; if he had waited two more weeks to file – which still would have met the filing deadline – he would have qualified.[7]

Instead he mounted a write-in campaign, and received 52% of the vote in the August primary election Under Detroit’s two-round system, the two highest vote-getters run against one another in the general election, which meant that Duggan ran against second-place finisher Benny Napoleon, who had won 29% of the vote. Duggan ran with the campaign slogan, “Every neighborhood has a future”, on a platform of financial turnaround, crime reduction, and economic development.[10] He received 55% of the vote in the general election in November, becoming the first white mayor of the now-majority-black city since Roman Gribbs, who served from 1970 to 1974.

In the Detroit mayoral election, 2017, Duggan was re-elected in a landslide, taking 72% of the vote to challenger Coleman Young II’s 27%.