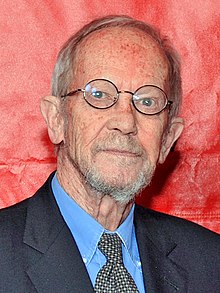 Elmore Leonard, one of America’s greatest crime novelists and often called the “Dickens of Detroit,” has died.

A worldly former advertising man, Leonard had a particular gift for the snappy, visceral dialogue of the street and of the cop shop. He started out writing Westerns in his spare time from his work as a Detroit ad man, but he lived long enough that his name became a byword for tightly written urban noirs shot through with mordant humor.

In November, the National Book Foundation honored Leonard with its medallion, an award saluting lifetime achievement.

Some movies based upon Leonard works include “Hombre” (starring Paul Newman), “Get Shorty,” “Out of Sight” (starring George Clooney, who became a friend) and “Jackie Brown” (based upon his “Rum Punch”).

The writer was actually born in New Orleans, but his family moved around in the South before ending up in Detroit in 1934, when he was 9 years old. He attended the Blessed Sacrament School on Belmont in Detroit. He majored in English at the University of Detroit, graduating in 1950, then plunged into an advertising career in Detroit in the 1950s