Bay County has been touched in some way by war as far back as 375 years, if you consider the Sauk Massacre in mid-Michigan in 1642 that marked the beginning of the Beaver Wars between Indian allies of France and Britain.

Capt. Joseph Marsac of Bay City led a company of Indians in the Battle of the Thames in the War of 1812, this nation’s second encounter with the British. It has recently come to light that 400 men from the early community here also fought in the War of 1812; however, they were Indian braves under Chief Tecumseh on the side of the British, many of whom were killed.

According to Gansser’s 1905 History of Bay County, “in the Black Hawk War of 1832, Marsac commanded a company of veteran Indian fighters, organized by Governor (George B., 1831) Porter. John Miller, a veteran of the War of 1812, came in 1855 as one of the first settlers of Merritt Township, where he lived to be 91 years old. The late John Grattan Sweeney, ex-sheriff, served in the Sixth United States Infantry in the Mexican War, and on the Indian frontier from 1849 to 1855. John Duschene, a respected German pioneer of Bay County, aged 89 years, is Bay county’s sole survivor of the Mexican War.”

The county had only about 3,000 residents when it sent 511 soldiers to the Union Army during the Civil War. Local participants included the county sheriff, Maj. Gen. Benjamin Partridge, and Henry S. Raymond, a captain in the 16th Michigan Infantry, the highest ranking local enlistee. We could include two sons of James G. Birney, William, and David, who had lived here in the 1840s and also became major generals and grandson James G. Birney IV, a local resident who enlisted in the 7th Michigan Cavalry in 1862 after he turned 18.

Gen. Partridge was in a reported 54 battles and was wounded several times. He was with Col. Joshua Chamberlain of Maine, along with fellow members of the 16th Michigan Infantry (many from this area) when they defended Little Round Top in one of Gettysburg’s key battles.

Longtime Bay City Times reporter Les Arndt reveals in his book, “The Bay County Story,” that Perry Phelps, a hotel owner here, was riding with the Michigan Volunteer Cavalry and was part of the detail that captured Jefferson Davis, president of the Confederacy.

According to Arndt, the first Indian from this area to fight for the Union in the Civil War was Thomas Ke-chit-ti-go, a Chippewa born near Saginaw Bay in 1836. Rejected at first, Ke-chit-ti-go finally was allowed to join Company K, First Michigan Sharpshooters and fought in several major campaigns, being discharged after he was wounded at the Battle of Spottsylvania Court House. He became Pinconning village marshal and later a lumberman in Grayling.

“Bay County during those four years sent 511 soldiers forth to battle, of whom 83 died in service, while many more gave up their young lives after being mustered out, from wounds and sickness, before peace again came to bless our land,” wrote Gansser. “When we find that the Federal census of 1860 gave Bay County a population of but 3,164 men, women and children, we can more readily appreciate the sacrifices of men and money made by this community, that our nation might live, one and indivisible.”

A census of Civil War veterans taken in the 1880s showed 500 veterans living here, but most were from other areas who had moved here after the war to work in the lumber industry.

Rear Admiral James Raby, born in Bay City in 1874, who was awarded the Navy Cross for escort duty during World War I. He held a pilot’s commission and often flew his own plane. A destroyer escort was named for Raby, whose son John also became a Rear Admiral and was awarded the Navy Cross in 1942 for action in French Morocco. The Rabys are buried in the same plot in Arlington.

Bay City became a bigger part of the nation’s military history on Feb. 15, 1898, when two local sailors were killed in an explosion aboard the USS Maine in Havana Harbor, an incident helping launch the Spanish-American War.

Seamen Howard Hawkins and Elmer Meilstrup were killed while another Bay Cityan, William Mattison, was injured.

In April Bay City’s Peninsular Company, 300 Strong, left by train and were shipped to Santiago, Cuba. After the Spanish surrender in July, the company was under quarantine for yellow fever at Montauk Point, New York. Officials said all the returning men were sick.

An undocumented role in the Spanish-American War was played by a Bay City doctor, Charles T. Newkirk, assigned to the Army camps in Tampa as troops were staged for shipment to Cuba. A librarian at the University of South Florida Library told this reporter that Dr. Newkirk, a veteran of the Brazilian and Argentine armies, instituted sanitation measures that helped control tropical diseases in the camp. Most of the credit for the process, however, went to Dr. Walter Reed, namesake of a medical center in Washington, D.C., she said. (The librarian was a graduate of the University of Michigan). Dr. Newkirk is buried in Pine Ridge Cemetery.

PFC John E. Olk, of the 128th Ambulance Company, 107th Sanitary Train, Michigan National Guard was killed 29 Aug. ’18 by artillery shell near Juvigny, Pfc. Erwin E. Carl, Sgt. Carl H. Smith, and Sgt. Ben Zielinski were wounded in action by the same shell as the men were trying to place a wounded soldier in an ambulance. Cpl. Robert E. Craidge, from Bay City and assigned to Co. I, 125th Infantry, was the other namesake.

Few experiences can match that of Bay Cityan Carl Boehringer, U.S. diplomat, who was stationed at the U.S. Embassy in Tokyo when the bombing of Pearl Harbor occurred. Boehringer, born here in 1903, was from a prominent local family that was in the nursery business. He was a graduate of Central High School and Michigan State University. (Boehringer Court off Park Avenue is named for the family.)Boehringer and his fellow members of the embassy staff were interned and exiled to Mozambique until repatriated and shipped to New York in August 1942. 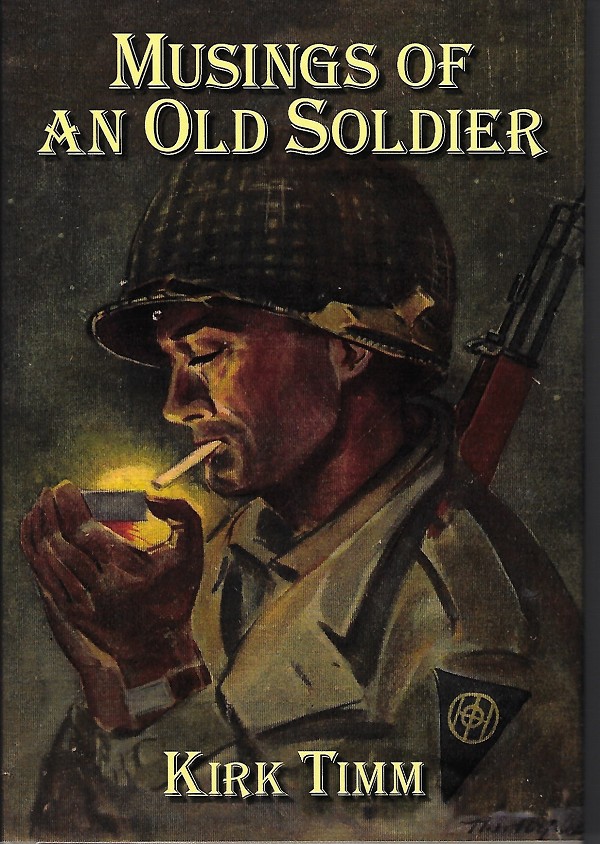 The late Sgt. Major Kirk Timm’s book reveals details of his World War II action and that of several other Bay Cityans.

Local veterans of World War II included the late Sgt. Major Kirk Timm of the 83rd Infantry Division who landed at Normandy and was highly decorated. My wife Dolores and I edited Sgt. Timm’s book about his service in the war entitled “Musings of An Old Soldier.” The book is shelved in the Wirt Library and gives detailed insights into combat in France and Germany during World War II.

Sgt. Christine Gavrila was a Detroit girl who joined the Marines in World War II and was assigned to underground munitions storage at Los Angeles, helping to thwart saboteurs who were stealing artillery shells. She later moved to Bay City and became a principal in the Bangor Township Schools. In 2010, we brought a Detroit documentary film, “Arsenal of Democracy: Our Greatest Generation,” to Bay City to raise funds for veterans.

Sgt. Andy Wendland, 17, landed at Normandy in the first wave, fought through the Bulge and was assigned as a guard at Nuremberg. He recalls the death of Hermann Goering and — has theories about how Goering obtained the cyanide capsule he used to kill himself.

Sandra Schulberg, daughter of Stuart Schulberg who produced the acclaimed 1948 documentary “Nuremberg: Its Lesson for Today,” and, because of former Nuremberg guard Andy Wendland, she brought the restored film to the State Theater to raise funds for veterans. An independent film producer she has a book, “The Celluloid Noose,” about her uncle Budd Schulberg’s hunt for Nazi films and evidence used at the Nuremberg Trials.

Jim Whyte of Bay City was a Marine at Iwo Jima who woke up the morning after a firefight to find about 50 dead Japanese lying around him. He picked up some pictures and a letter from one Japanese soldier and 70 years later found the man’s family and traveled to Japan to return the mementos.

Lt. Col. John M. Slattery, (1928-2008) a Bay City native, was a Marine pilot who served in the Pacific Theater, China and was being trained for an invasion of the Japanese mainland when the war was ending. After the war, he returned to Bay City and began college. In 1951 when the Korean War erupted, Slattery was recalled as a Marine and sent to Korea as an infantryman and suffered from frostbite.

Later he graduated from Air Force Flight School and served as a pilot throughout the USA, Libya and two tours in Vietnam.

Slattery flew more than 100 life-saving missions and received 30 citations including the Legion of Merit, the Distinguished Flying Cross with one Oak Leaf Cluster, the Bronze Star, an Air Medal with 15 Clusters, the Vietnam Cross of Gallantry with two Silver Stars and the Vietnam Air Cross of Gallantry with Bronze Wings. He had more than 6,000 hours of flying time in rotorcraft. He also won an award for meritorious service as deputy chief of staff for operations (helicopter) with Air Force Advisory Team Two, headquartered at Nha Trang Air Base, from 1971-1972.