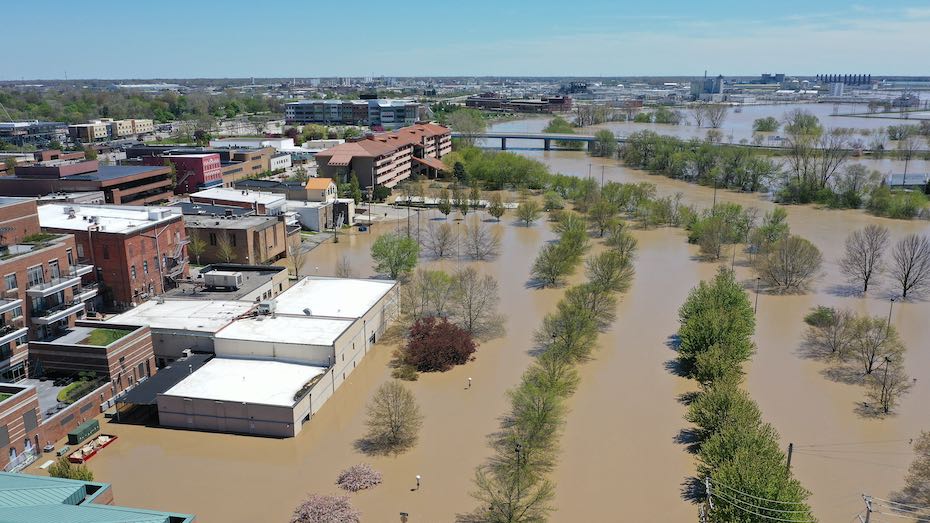 Above: An aerial view of floodwaters flowing from the Tittabawassee River into the lower part of downtown Midland on May 20, 2020 in Midland, Michigan.

Heavy rains over the last few days doused Michigan, prompting flood warnings along rivers across the state and forcing some residents to evacuate their homes and navigate waterlogged roads.

At least two rivers in mid-Michigan — the Tittabawassee River in Midland and the Rifle River near Sterling — had reached their major flood stage Tuesday afternoon. Moderate flooding has been observed at a handful of other rivers in mid-Michigan as well as the west and southwest portions of the state, according to the National Weather Service.

Two overflowing dams — Edenville and Sanford — in the center of Michigan’s Lower Peninsula amid days of rain has forced the evacuation of about 10,000 and caused massive flooding, which the governor said could put Midland under 9 feet of water.

As of Wednesday morning, the Tittabawasse River hit a historic high, rising above its previous record in 1986, and reaching 34.6 feet. Major flood stage is 28 feet. By the end of the day, the National Weather Service forecasted it would be at 38 feet.

As many as 10,000 people have been forced to evacuate.

Media reports had called Midland’s flooding in 1986, which caused extensive damage to agriculture and destroyed homes, “the worst natural disaster in the state’s modern history.”

Gov. Gretchen Whitmer has declared a state of emergency for Midland County, saying parts of the city of Midland, the village of Sanford, Edenville Township, and Dow Chemical had been or were being evacuated.