Brett and Drew Pierce are 2020’s most unexpected kings of the box office. 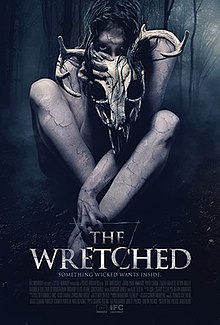 Their new movie “The Wretched,” shot in Michigan’s Leelanau Peninsula, has held the top spot in box-office earnings since it opened May 1, according to Box Office Mojo.

How did a low-budget horror film become No. 1 in the nation? With multiplexes and art-house theaters across the country shut down by the COVID-19 crisis, drive-in theaters are having a moment  in some states.

And since Hollywood has stopped releasing new movies temporarily, the little indie written and directed by the Pierce brothers — who grew up in Detroit and Royal Oak — is providing those old-fashioned outdoor sites with some thrills and chills.

“The Wretched” earned nearly $66,000 at about a dozen drive-ins on its first weekend. Since then, it’s expanded to about 21 sites and reached $332,000 in earnings, a drop in the bucket of Hollywood’s usual top receipts. (For comparison, the No. 1 movie for all of 2020 so far, “Bad Boys for Life,” made $419 million worldwide before quarantining began.)

But first place is first place, no matter the total.  This weekend, “The Wretched” will triple its screening locations.

“Now they’re bumping it into 60 (sites), starting this Friday,” says Brett Pierce, who’s based in Los Angeles, as is his brother.

The siblings, who wrote and directed the project together, have roots in horror story-telling through their father, Bart Pierce. He did special effects for  1981’s “Evil Dead,” the shoestring-budget cult classic by Detroit’s own Sam Raimi that spawned a franchise and had a big impact on the future of scary movies.

Source : Julie Hinds, “Top movie in America during pandemic is by Detroit brothers and was filmed in Michigan“, Detroit Freee Press, May 22, 2020.