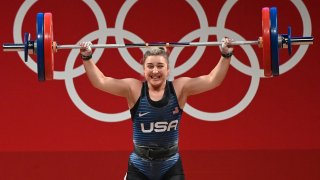 American 22-year-old Katherine (Kate) Nye delivered the best performance for a U.S. weightlifter at the Olympics in over two decades Sunday, winning a silver medal in the women’s 76 kg/156 lbs category at the Tokyo Games.

Nye is the first American to win silver or better in weightlifting at the Olympics since Tara Nott lifted to 48 kg/106 lbs gold at the Sydney 2000 Olympics.

The Berkley, Michigan, native first took up weightlifting as a teenager through CrossFit training after spending 11 years as a gymnast. In 2019, she became the youngest American to win a world weightlifting championship when she lifted a total of 248 kg (546 lbs) to top the non-Olympic 71 kg/156 lbs weight category. She was 20 at the time.

She moved up five kilos in the two years since to compete in the 76 kg/156 lbs division, which is contested at the Olympics.

Nye completed her first snatch attempt of the competition at 107 kg (236 lbs) with relative comfort. She was just as convincing on her second lift at 111 kg (245 lbs).

For her final snatch attempt, Nye successfully raised a personal best 114 kg (251 lbs) in what appeared to be a dream start to the competition. Nye was visibly thrilled and threw her arms in the air in celebration immediately after being awarded the lift.

That proved to be a costly error.

The jury of officials put the lift under review, ultimately ruling it a no-lift when replay showed that Nye removed her hands from the bar before it had fallen past her shoulders. For safety reasons, weightlifters must guide the bar’s fall at least to shoulder level with both hands. Failing to do so disqualifies the lift.

Nye had roughly 30 minutes to come to grips with her error, put it behind her and refocus for the second half of the competition, the clean & jerk. Her second lift at 111 kg had her in third position at the break.