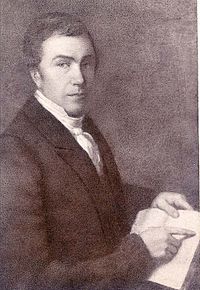 Isaac McCoy (June 13, 1784 – June 21, 1846) was a Baptist missionary among the Native Americans in present-day Indiana, Michigan and Missouri. He was an advocate of Indian removal from the eastern United States, proposing an Indian state in what is now Kansas, Nebraska, and Oklahoma. He also played an instrumental role in the founding of Grand Rapids, Michigan and Kansas City, Missouri.

Lewis Cass, the second governor of the Michigan Territory, signed the Treaty of Chicago on August 29, 1821, with the chiefs of the Ottawa, Chippewa, and Potawatomi nations. The Potawatomi agreed to cede to the United States all the territory lying west and north of the St. Joseph River, and the United States agreed to provide funds for a blacksmith and a teacher, to reside on “one mile square on the south side of the St. Joseph” within a tract that the Potawatomis had reserved for their villages. McCoy, who had previously traveled to Detroit and petitioned Cass to provide funds for Indian missions in the 1821 Treaty, secured the position of teacher.

In December 1822, McCoy left Fort Wayne and moved his family and 18 Indian students to a site on the St. Joseph River near the present-day city of Niles in southwestern Michigan; he opened a mission to the Pottawatomi. The Carey Mission, as he named it, was 100 miles from the nearest White settlement. The Pottawatomi gave McCoy a relatively warm welcome and helped feed his large family and Indian students through their early seasons in the territory. McCoy enjoyed more success here than in his earlier endeavors. His school expanded to have 76 Indian children, four Indian employees, five missionaries, six white children, and a millwright.

The first school at Carey was opened on January 27, 1823, and originally had 30 Indian pupils. An expedition that visited the mission in June 1823 reported, “The school consists of from forty to sixty children, of which fifteen are females. They are either children of Indians, or half-breed descendants of French and Indian parents; there being about an equal number of each. It is contemplated that the school will soon be increased to one hundred.”

In 1824 an agent for Cass reported that the Carey Mission was “a colony firmly settled, numerous, civilized and happy”. Fifty densely wooded acres had been cleared and fenced, and workers had raised large amounts of corn, oats, and potatoes. By 1826 over 200 acres (0.81 km2) of land had been cleared, and 58 acres (230,000 m2) had been planted.

The mission became a way station for white settlers of the Michigan Territory. McCoy realized that they would soon supplant the native Indians. He wrote: “Our location was so remote from the settlements of white people when we first made it, and the inconveniences of reaching and residing at it so great, that we hoped, at that time, to be able to push forward the work of civilization to a state not much liable to injury by the proximity of white population, before we should be crowded by it.”

In 1826, McCoy led his family in another move, deeper into the frontier, where he established the Thomas Mission to the Odawa people, at what was later to become Grand Rapids, Michigan. McCoy and his missionaries were the first European-American settlers in Niles and Grand Rapids.

During the period from 1827 to 1829, southwestern Michigan began to be actively settled, and the Carey Mission declined, as a result of the U.S. policy of Indian removal. In 1827, in the Treaty of St. Joseph, the Potawatomi tribe ceded some of their reserved lands in southwestern Michigan. The treaty stated that its purpose was “to consolidate some of the dispersed bands of the Potawatamie Tribe in the Territory of Michigan at a point removed from the road leading from Detroit to Chicago, and as far as practicable from the settlements of the Whites”. In 1829 McCoy removed to the Thomas station, another mission he had established near the Grand River. The only missionary who remained at Carey was Robert Simerwell. With passage of the Indian Removal Act in 1830, the school at Carey Mission was discontinued, and in 1831 McCoy led a number of the Potawatomi to a new mission in Kansas.