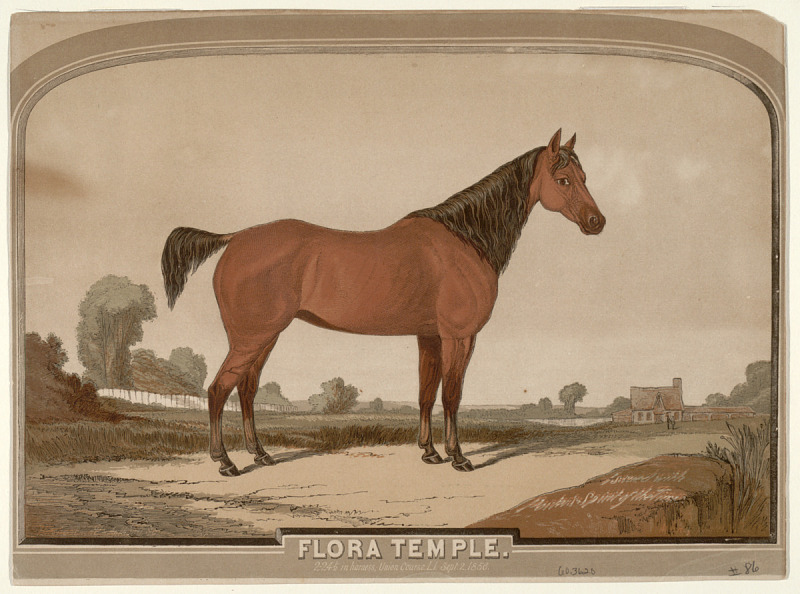 Flora Temple was foaled in 1845 it Utica, New York from the sire Loomis Bogus and a dam named Madame Temple. By 1861 she had become a racing icon, the “Queen of the Turf” and was the second mare, after Lady Suffolk, to trot the mile in under 2:30. Flora equaled or lowered the record six times, continually beating her own best times. Flora Temple is the “Bob Tail Nag” referred to in the famous song “Camptown Races” by Stephen Foster, so popular that ships were named after her. After her death in 1877, she was inducted into the Harness Racing Hall of Fame in 1955 as an “Immortal” because she won 92 races in her career. This image depicts Flora Temple at her last home, Erdenheim Stud Farm, owned by Aristides and Geroge Welch.

On October 15, 1859, the horse “Flora Temple,” racing at the National Racing Park in Kalamazoo, broke the existing world’s record for trotters, running the mile in two minutes, nineteen and three-quarters seconds, and attracting the attention of Currier and Ives who made an engraving of the race.  This was not the first time she broke the record, but the sixth, and she would go on to earn 92 records.