On July 1, 1882, The Passage Island lighthouse on Isle Royale was lit for the first time. The lighthouse is the northernmost lighthouse in the United States.

The  rest of the story:

With increased mining of copper, nickel and silver along the north shore of Lake Superior toward the end of the 1860’s, the volume of vessel traffic making its way through the area increased dramatically. With many vessels making the deep-water passage between the northern tip of Isle Royale and Passage Island, a scant three and a half miles to the north, the Lighthouse Board determined that a light on the southern tip of Passage Island was necessary to mark the deepest northern edge of the channel. Realizing that the costs associated with construction at such a remote and inaccessible location would be high, the Board requested an appropriation of $18,000 for the construction of the station in its annual report for the 1871 fiscal year. With no Congressional response, the Board repeated the request in each of its annual reports for the following four years. 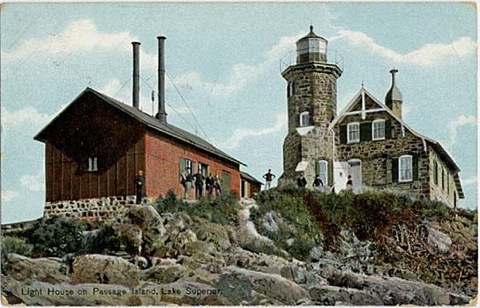 For some time, the Lighthouse Board had been unsuccessfully attempting to convince the Canadian Government to build a navigational aid on Colchester Reef in the Canadian waters of Lake Erie to the east of the entrance to the Detroit River. Realizing that the planned light on Passage Island would be of extreme advantage to Canadian maritime interests in Lake Superior, on March 3, 1875, Congress took the opportunity to apply some additional pressure on their Canadian counterparts by taking the atypical step of authorizing that the $18,000 be made available to the Lighthouse Board only upon the completion of a light at Colchester Reef by the Canadians.

Since history shows that the Canadian Government did not complete construction of the light on Colchester Reef until 1885, we can only assume that Congress decided to release the funds before the requirements of the contingency were met since the $18,000 was released to the Lighthouse Board in 1880.

The following summer, the Lighthouse tender WARRINGTON delivered a working party and materials at Passage Island, and work began at the site with the clearing of the grounds and the construction of temporary dwellings for the workers. 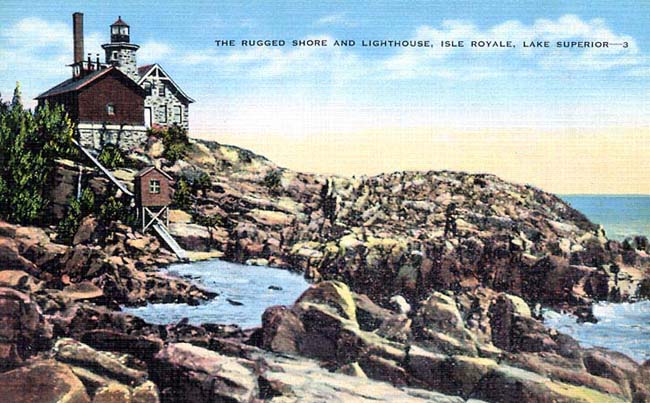 The plans for the Passage Island Station called for a virtual duplicate of the “Norman Gothic” style structure previously used at Chamber’s Island, Eagle Bluff, and McGulpin’s Point, among others. The 26′ x 30′ two-story fieldstone keepers dwelling featured an integral fieldstone tower in its southwest corner. With a buttressed base 9′ 4″ square, the tower transitioned to an octagonal plan above the second floor level. A circular spiral cast iron stairway within the tower featured landings on both the first and second floors, and served double duty as the only stairs between the two floors and for access to the tower. The ten-sided cast iron lantern, fabricated at the Lighthouse Deport in Detroit and shipped to the site in sections, was reassembled atop the tower. Finally, the fixed red Fourth Order Fresnel lens was carefully assembled on its cast iron pedestal within the lantern. With a tower height of forty-four feet, the light’s location atop a rocky cliff at the water’s edge provided the lens with a seventy-eight foot focal plane.

Finally, with the installation of a 1,500-pound fog bell with a Steven’s clockwork striking mechanism, work at Passage Island was complete, and the light was exhibited for the first time on the night of July 1, 1882.

For information about Isle Royale and all of the associated lighthouses, see “Lighting the Lake: The Lights of Isle Royale”