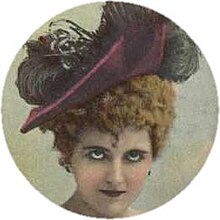 Clara Ward was born June 17, 1873 to Captain Eber Brock Ward of Detroit, Michigan’s first millionaire. She married the Belgian Prince of Caraman-Chimay when she was only 16; he was twice her age and rather poor. After a few years, and a couple of children, while dining out at a swanky Parisian restaurant she fell for the Hungarian ‘Gypsy’ violinist, Rigo Jancsi. The two eloped the following month, and Clara would marry two more times (to an Italian waiter and then a train station manager). In the 1890s she developed her art form of ‘poses plastiques’ (appearing in a flesh-colored body stocking) and appeared on stage at the Folies Bergere and Moulin Rouge. She was painted by Toulouse-Lautrec and written about by Marcel Proust. Definitely a colorful life; she died in Italy at the age of 43.