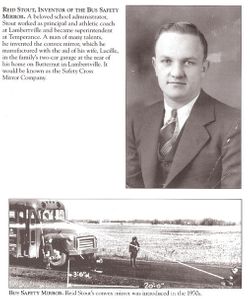 A near-accident was the inspiration for the invention of the school bus safety mirror. These mirrors help the bus drivers see the blind spots, and avoid hitting children that may be unseen in front of the bus.

Via the Toledo Blade, it all began with Reid Stout. Reid was not just the school principal, he was also a part-time bus driver. It was in the late 1940s and Reid was driving the bus, dropping kids off after school. A nine-year-old girl who had gotten off the bus accidently dropped her belongings…..in front of the bus. As she kneeled down to pick them up, Reid was about to put the bus in gear and move forward. The little girl was so far below the bus hood that she was completely hidden from view. The other students saw what was happening and began shouting and screaming to Reid to stop. He stopped, got out, went around to the front of the bus and saw the girl, still kneeling, picking up her things.

It was something that Reid could not get out of his mind, thinking about what might have happened if the alert students hadn’t yelled at him. Months later, he came up with the idea for a safety mirror after spotting an outdoor metallic gazing ball. He made a makeshift version and took it to a mirror plating firm that made about a dozen. In 1950, all Bedford Township buses had these mirrors installed.

More districts found out about the invention, but unfortunately it took a tragic accident to get the state legislature to make the mirrors mandatory. After a six-year-old girl was killed by a bus in Center Line, Michigan, Reid demonstrated his invention to education officials in Lansing. Impressed, they put it through, making the safety mirrors a necessity for all school buses.

In October 2009, a marker was finally erected in Lambertville noting his historic achievement.